The Economic and Financial Crimes Commission (EFCC) is reportedly probing Senate President Bukola Saraki over the use of N17 billion bond secured by the Kwara state government. 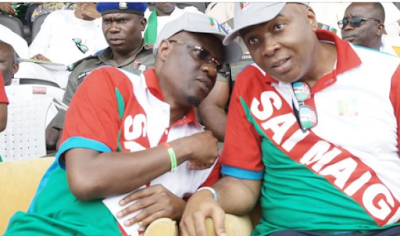 Abdulfatah Ahmed, governor of Kwara, is also being investigated.

According to The Nation, the EFCC suspects that the bonds raised in 2009 when Saraki was governor of the state may have been misappropriated by both administrations.

The fund is said to have been budgeted for 13 projects and loan refinancing package under the governments of Saraki and Ahmed.

Some of the said projects include N2billion Asa Dam mixed use development project, Ilorin water distribution project which was allocated N2 billion but has reportedly gulped N3.7 billion, Shonga irrigation project worth N2.9 billion and the International Aviation College which was allocated N1.5 billion “but N2.4 billion was spent on the construction and purchase of equipment”.

The newspaper quoted an EFCC fact-sheet on the investigation thus: “We are investigating a petition forwarded by the Code of Conduct Bureau, Abuja. It was alleged that the Senate President, Dr. Bukola Saraki, Governor Abdulfatah Ahmed and the incumbent Accountant-General of Kwara State allegedly conspired and misappropriated N17billion raised through bond in 2009.

“Letters of invitation were sent to the Secretary to the state government, the accountant-general of the state as well as permanent secretaries for ministries that handled the projects.”

On load financing, the fact-sheet read: “The prospectus of the bond stated that Kwara state had indebtedness of N4, 980,000 in external loans out of which N3.3billion amounted to legacy obligations preceding the then administration.

“They proposed utilizing N2, 400,000,000 from the bond proceeds of the bond to service part of the legacy  obligations which were (a) African Development Bank(AFDB)- construction of four specialist hospitals in Jebba, Offa, Oke-Ode and Sobi at a cost of N1,440, 828, 000; (b) AFDB-equipment procurements to the four specialist hospitals; ( C) World Bank Essential Drug Projects.

“The total debt was N3, 301, 162, 42 only. Documents obtained from the accountant-general of the state did not show any indication that monies were paid to AFDB or the World Bank instead another list with heading ‘OTHER PAYMENT’ showed the names of government agencies and private companies being paid a total of N974, 896,343.47.”

‘WILD GOOSE CHASE’
The newspaper quoted a state government source privy to the probe as denying any misuse of the bond.

“The EFCC is on a wild goose chase because the bond has been fully repaid since 2014 without any outstanding liability for the people of Kwara state,” the source was quoted as saying.

“We suspect sheer politics and a plot to intimidate Saraki and Ahmed because 2019 polls are around the corner.”

Saraki and Ahmed are currently under probe over their alleged links with suspects arrested in connection to the Offa robbery incident.