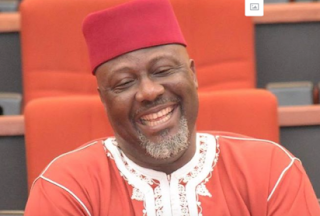 The lawmaker representing Kogi West Senatorial District, Senator Dino Melaye, has berated the National Chairman, All Progressives Congress, Adams Oshiomhole, for claiming that the seat of the Senate president belongs to the ruling party.

The lawmaker added that the Senate presidency seat belongs to the Federal Republic of Nigeria, rather than to the ruling All Progressives Congress.

Melaye pointed out that the opposition Peoples Democratic Party gave the block vote that made Senator Bukola Saraki emerge as President of the Senate.

The lawmaker, who is one of the 14 senators that have so far defected from APC to PDP, said this while briefing journalists in Abuja on Sunday.

Oshiomhole had asked Saraki to resign as Senate President since the lawmaker had defected from the ruling to the opposition party. According to the APC chairman, the seat belongs to the majority party.

Melaye, however, condemned Oshiomhole for referring to the seat of the Senate President as a ‘crown’ that belongs to the APC. According to him, the seat is national and not political.

He said, “For those who are saying that Saraki should resign (as Senate President), I am so disappointed in the National Chairman of APC.

“He was very busy with labour and social issues that he did not take time to look at the Constitution and our extant laws to know that crowns are worn in the kingdoms, villages and communities; that there is no crown in the National Assembly.

“He has appropriated the seat of the Senate President of the Federal Republic of Nigeria to a political party. That is intellectual stagnancy. He has exhibited what can only be as a result of brain arthritis.

“I cannot understand why the national chairman of a party will not know that the seat of the Senate president is of the Federal Republic of Nigeria and has no party affiliation. Then, he appropriated the seat to APC, forgetting that even those who elected the Senate President were from the PDP.

“The PDP gave the Senate President 42 votes out of the 53 votes that he got on the day of election. So, the APC is the minority, even in the election of the President of the Senate.

“But the National Chairman of the APC, in his ‘bolekaja’ approach to life, myopically, intellectually stagnantly… anyway, you can’t give what you don’t have.”