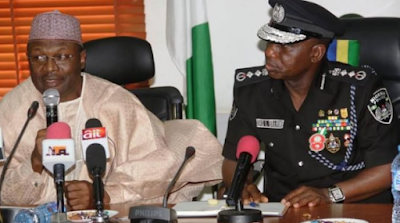 Stephen Pam,a judge, gave the order after Adegboyega Awomolo, counsel to Yakubu, told the court that he did not know where his client was.

On August 1, the court had issued a bench warrant for the arrest of Yakubu for “flagrant disobedience of court orders”.

According to Pam, the bench warrant issued for the arrest of Yakubu has not been vacated and still subsists.

”The I-G is hereby ordered to enforce it by bringing him to court on the next adjourned date,” he held.

He adjourned the matter until August 14 for continuation of committal proceedings.

Earlier, Awomolo told the court that he had written a letter to Adamu Abdu-Kafarati, chief judge of the federal high court, asking that the matter be transferred to another judge.

Awomolo also told the court that he had filed three appeals in respect to three different rulings delivered by Pam on the matter.

He asked the court for an adjournment to allow the chief judge reassign the matter to another judge.

Gordy Uche, counsel to Ejike Oguebego, the plaintiff, however, opposed the application for an adjournment on the grounds that there was no basis for adjournment.

Uche told the court that although Awomolo had written to seek the disqualification of the judge, the letter was not copied to him or the judge as he was only just informing the court.

Uche also argued that it was a special court constituted with a fiat to hear the contempt charge within a specific timeline.

According to him, “as at today, the fiat has not been withdrawn and in spite of Awomolo’s letter, there has been no order from the chief judge directing Justice Pam to stop sitting on the matter.’’

The contempt charges were brought against the INEC chairman by Oguebego for his refusal to recognise him as chairman of the Peoples Democratic Party (PDP) in Anambra.

This was in compliance with a supreme court judgment of December 2014.

Pam had, on July 5 and July 10, ordered Yakubu to appear in court and show cause why he should not be sent to prison for contempt of court.

Following his failure to appear in court on both occasions, the judge issued a bench warrant for his arrest.