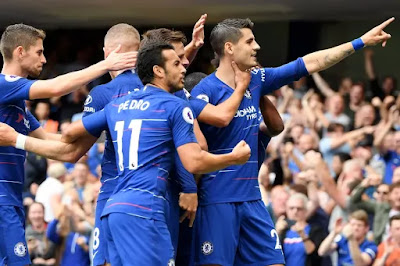 Chelsea secured their second straight win of the season and sentenced Arsenal to a second defeat with a 3-2 win in a Stamford Bridge thriller that had seen Arsenal fight back from two goals down to level.


The Blues pressed Arsenal from the start, Pedro whipping an effort over and Jorginho chipping a pass just too far in front of the roaming Ross Barkley.

But after Mesut Ozil had steered across goal for Arsenal, Maurizio Sarri's side were rewarded for their enterprise as Jorginho played the ball down the left for Marcos Alonso, whose cross set up the unmarked Pedro to sidefoot past Petr Cech with nine minutes gone.

Barkley was close to doubling the advantage within minutes with Arsenal all over the place, his shot from the edge of the area dipping over, and then Willian almost found Pedro inside the box before Cech claimed.

Pierre-Emerick Aubamayang tried to hit back but his low shot posed no real problems for new keeper Kepa, and with 19 minutes gone the same player blazed horribly over the bar after Hector Bellerin had set him up.

Less than a minute later, the striker was made to pay as his side went 2-0 down, Alvaro Morata latching on to a long pass and outwitting Shkodran Mustafi before rolling beyond Cech.

Only a Mustafi interception prevented Willian from putting Morata through again with Arsenal rocking, and Granit Xhaka went into the book for a late challenge on Pedro.

Shortly after the half hour, another chance came and went for Arsenal when Henrikh Mkhitaryan but he could only replicate Aubamayang's wayward finish from a similar position.

Wilian's cross set up N'Golo Kante, whose strike crashed off a defender, but Arsenal pulled one back against the run of play 10 minutes before the break when Mkhitaryan smashed a low strike past Kepa.

Within seconds, Morata almost restored the two-goal margin when Cech tipped his shot over the bar -- but four minutes before the break Arsenal made it 2-2.

The goal came when Bellerin and Mkhitaryan combined down the right and the latter's low cross was steered powerfully home by Alex Iwobi.

Matteo Guendouzi's low strike was held by Kepa as Arsenal sought to go into the break with an improbable lead, and then Aubameyang sent a shot narrowly wide of the near post and Iwobi steered Mkhitaryan's cross over.

Arsenal boss Unai Emery made a change at half-time, bringing Lucas Torreira for Granit Xhaka, and his side started the second period on the front foot, Aubameyang's low cross just eluding Ozil.

After 52 minutes, the Gunners put themselves in trouble when Pedro dispossessed Mustafi and found Kante, whose shot was blocked by Papastathopoulos with Chelsea claiming handball, before Cech stopped Barkley's low shot.

Barkley and Hazard made way for Eden Hazard and Mateo Kovacic on the hour as Sarri tried to put his side back on top, and Jorginho had a deflected strike held by Cech.

Emery made another change, bringing Aaron Ramsey on for the below-par Ozil, with Chelsea threatening again as Hazard's fine run ended in a low cross that eluded his teammates.

A Torreira foul on Kovacic gave Chelsea a free kick in a dangerous position, but Cech punched away David Luiz's delivery before both managers made a change, Alexandre Lacazette coming on for Iwobi for Arsenal and Olivier Giroud replacing Morata for Chelsea.

Ramsey's strike from distance was fumbled but then held by Kepa before Mustafi was booked for a foul on Hazard -- but it was Chelsea who scored the all-important fifth goal with 10 minutes remaining as Hazard's low cross was swept home by Alonso.

Hazard almost put the points beyond doubt when he waltzed through after a lovely move but was denied by Cech, with the Gunners keeper then stopping a powerful Giroud strike, but Ramsey nearly snatched a point with an injury-time effort that flew just over.