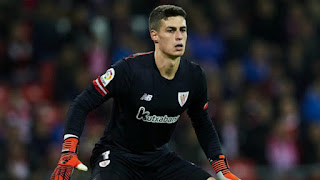 The deal, which has been greeted by widespread astonishment, will also shatter Chelsea’s record that had stood at £57m for striker Alvaro Morata, who joined from Real last summer.

The path of Courtois to Real is set to be further smoothed by the Liga club’s willingness to send midfielder Mateo Kovacic on a season-long loan to Chelsea.

Along with Kepa, Kovacic is expected in London to complete a pre-deadline switch to Chelsea in what constitutes a frantic end to the transfer window.

Spanish sources claim 23-year-old Kepa will fly to England at around 10am on Wednesday morning, having travelled to Madrid on Tuesday in preparation for his switch.

Chelsea head coach Maurizio Sarri would not be drawn on the future of Courtois and would only go as far as confirming he rates Kepa highly after watching his team win their final friendly of pre-season on penalties against Lyon.

Asked if Courtois will now join Real, Sarri said: “I don't know. But I think I am here just to talk about this match and the first question was about Courtois. I don't know at this moment. I want to speak with my club. Then, all together, we'll decide about it.”

On Kepa, he added: “I saw him one year ago [when I was at] Naples and my first impression was he was a very good goalkeeper. Very young, but very, very good.”

One player Sarri was more forthcoming on was Eden Hazard, who made an appearance as a 68th-minute substitute and struck the winning penalty after 38-year-old Rob Green had saved from Lyon’s Pape Cheikh Diop.

Hazard has assured Chelsea he will continue to give his all for the club, despite being denied a move to Real.

“I don't see this problem in this moment,” said Sarri. “I have spoken with Eden two or three times in the last two days. He has spoken of everything. I think this problem, the Hazard problem, is not present now.”

Hazard wore the captain’s armband, even when Gary Cahill and Cesar Azpilicueta were introduced late in the game and Sarri did not rule out the prospect of the forward becoming his full-time skipper.

The Kepa deal will eclipse the £66.8m Liverpool paid Roma to make Alisson Becker the world’s most expensive goalkeeper in July. The Brazilian had been Chelsea’s first-choice target to replace Courtois, but, at that time and with other targets still to land, the Blues were unwilling to enter an auction.

But with time running out to replace Courtois, Chelsea were not in a strong bargaining position and had to move quickly and decisively to make sure they do not go into the new season without a top-class replacement.

Kepa almost moved to Real for just £18m in January, but the deal was blocked by former manager Zinedine Zidane and Athletic offered the player a new long-term contract, which increased his buyout figure to £71m.

The decision to spend so much money on Kepa represents a gamble on Chelsea’s part, as he has only got one Spanish international cap and has no experience outside his home country.

He joined Athletic at the age of 10, was part of the Spain squad that lost to Germany in the final of the Under-21 European Championship in 2017 and was also part of the senior squad at the 2018 World Cup, alongside David De Gea and Pepe Reina.

As exclusively revealed by Telegraph Sport, Courtois attempted to force Chelsea’s hand by going AWOL on Monday and the Belgian also failed to appear at their Cobham base on Tuesday.

Chelsea contacted Courtois to request that he returns on Wednesday to explain his absence, but there has been no indication that he plans to do so and his £35m move to Real should now go through.

Courtois had indicated a willingness to sign a new £200,000-a-week contract with Chelsea in December last year, but subsequently stalled on putting pen to paper and decided he wanted to leave.

Real are prepared to allow Kovacic, who himself skipped a training session with the Spanish club, to join Chelsea on a season-long loan on the proviso they get Courtois.