2019: Women embark on house to house campaign for Buhari/Osinbanjo 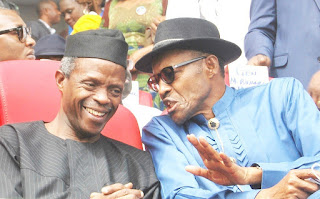 Ahead of the 2019 Presidential election, a new women group has emerged in Niger state and set to embark on a house to house campaign for the success of Buhari/Osinbanjo success at the polls.


The group named Noble Women Movement For Buhari / Osinbajo Support group has already mobilized 274,000 across the state and has kick-started its campaign for the presidential ticket of president Muhammadu Buhari and Osinbajo with a mass rally in Minna over the weekend.

Coordinator of the group in the state Hajia Zaynab Abubakar said similar women groups are also being floated in all the 36 States and the Federal Capital Territory with the same mission of “selling” President Buhari and his Vice, Professor Osinbanjo to the electorate for next year’s election.

The coordinator disclosed that the group has also embarked on the mobilization and sensitization of the women across the country on the need to be registered ahead of the general adding that the assignment had been a success story.
” Our first assignment is to ensure that virtually all women of voting age obtain their voter’s card because It is only with the Voters Cards that we can reelect President Muhammadu Buhari, so if you don’t have voter’s card you cannot be a member of this group”.

“Besides the mobilization for the reelection and sensitisation of women to obtain their voter’s cards, another agenda the group would pursue is getting women elected into public offices because women are more dependable and are not as greedy as our men who are daily defecting from the party that made them politically”, she remarked.

She decried the spate of defection from the APC to the PDP but added that rather than have any negative impact on APC, it will only energize the Party towards winning next year’s general elections with less stress.

“Defection will not affect us in 2019, those defecting are thieves because they were used to getting free money, but Buhari is a man of integrity and financially disciplined and cannot change because of them,” she declared.

Hajiya Abubakar therefore called on those that have just defected to come back to the fold, (APC) before it is not too late so as to see to the reelection of President Buhari and his Vice, Professor Osinbanjo for a better Nigeria.