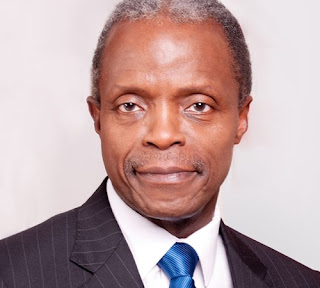 The Acting President of Nigeria, Prof. Yemi Osinbajo, has expressed  satisfaction over the $16 billion Egina Floating Production Storage Offloading (FPSO) project, adding that the economy was ready for more investment.


He made this known at a visit to  Total’s Egina  FPSO in LADOL Free Zone, Lagos. He explained that the present administration has laid the foundation for the nation’s economy explaining, “We strongly believe that the Nigerian economy must be private sector lead. This project, for example, is a $16 billion project in naira terms, that is about N5 trillion.

“The entire Nigerian budget is about N9 trillion and our spending on infrastructure, which is the largest in the history of Nigeria is N1.5 trillion. So it tells you that this project alone is several times more than the federal government spending on infrastructure. This is the story of developed economies that are private sector driven, as there is no way that government’s revenue can possibly satisfy the demand.”

Also speaking, Managing Director, Total Upstream, Nigeria, Mr. Nicolas Terraz, stated that the company would continue to invest in Nigeria’s economy as it had invested over $10 billion in the last five years.

Represented by Deputy Managing Director, Deepwater, Mr. Ahmadu-Kida Musa, Terraz explained that Egina, remained the largest investment currently ongoing in the oil and industry, adding, “The project is expected to be completed in the quarter of 2018 within the initial budget of $16 billion.

“The Egina FPSO is a newly built spread moored FPSO, and will be connected through subsea production systems to 44 wells consisting of 21 oil producers and 23 water injector wells via umbilicals, flowlines and risers.”

“On plans to partner with the government on zero gas flaring,  the project is designed such that there will be no routine gas flaring during normal operation as all the treated gas will be transported through the existing Akpo-Amenam pipeline to the Bonny NLNG plant.”

He noted that the project will add 200,000 barrels of oil per day to the production of the country, representing about 10 percent of Nigeria’s current total capacity.

While lauding the support received from its partners, Chairman of LADOL, Mr. Ladi Jadesimi, stated that the achievement of the project was a pointer to the growth of local content and capacity of indigenous operators.

He said: “LADOL has demonstrated that there are talents in Nigeria and ease of doing business is very much accommodating as well as encouraging. We have grown from how we started in 2001 and have made Nigeria a hub and opportunity for prospective businesses to come in. We will continue to grow our capacity and ensure that more projects are done in Nigeria order than encouraging capital flight.”