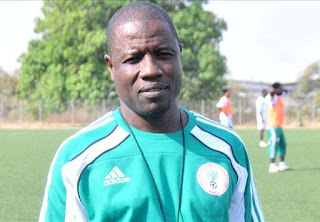 Chief coach of the Super Eagles of Nigeria, Salisu Yusuf has been caught on camera taking N360, 000 from fake football agents who wanted him to select two players for the 2018 African Nations Championship (CHAN).

He was in charge of the Super Eagles Team B to the 2017 WAFU and 2018 CHAN where they lost in both finals.

According to a video report aired by the BBC, an investigation led by Ghanaian journalists, who posed as football agents for some players approached Yusuf in September 2017 for a conversation about players’ selection.

During the conversation, they handed the Nigerian coach N360, 000 ($1000) and alluded to more cash incentives if he selects their players for CHAN 2018 which held in Morocco.

“So if anything goes through and these players are able to get their contracts, you will get 15% of that contract,” one of the reporters posing as an agent told Yusuf to which he replied; “they will be in CHAN.”

The two players were eventually selected for CHAN 2018 although the investigation stated that there is no suggestion that the money given to Yusuf influenced the selection.

Although he told the reporters that team selection is based solely on performances, Yusuf, a top Nigerian coach will be facing the wrath of FIFA, CAF and the Nigeria Football Federation (NFF).