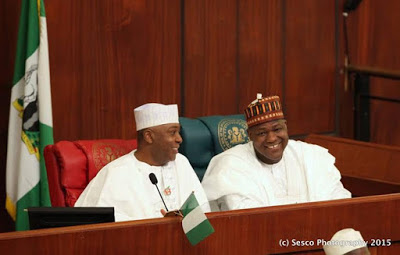 The Chairman, Senate Committee on Police Affairs, Senator Abu Ibrahim, on Wednesday asked Senate President, Abubakar Bukola Saraki and Speaker, House of Representatives, Yakubu Dogara, to resign from the ruling All Progressives Congress (APC) in their own interest.

Ibrahim, a strong ally of President Muhammadu Buhari in the upper chamber, said that the failure of Saraki and Dogara to leave the party would lead to their immediate expulsion.

The Senator who represents Katsina South Senatorial District also said that they have it on good authority that the plot to impeach President Buhari would have commenced today (Thursday).

Ibrahim who appeared to have spoken the minds of other APC senators said that developments in and around the National Assembly have clearly shown that Saraki and Dogara could no longer be trusted in the fold of APC members.

Speaking specifically about the defection of 13 senators and 37 House of Representative members from the APC, Ibrahim said that the defections were not only expected but did not come to him as a shock.

Read Also: Police: we were not at Saraki’s home
He said that he made the calculation and came to the conclusion that at least 13 senators will leave the APC.

He noted that the only defection he did not anticipate was the Sokoto State senator, Abdullahi Danbaba.

He said, “I know that those who take Saraki like god will go. This is because wherever Saraki goes they will go. But the mistake they have made is to realize that politics is local.

On the speculation that some APC senators were quartered in a high profile hotel in Abuja on the night preceding Tuesdays Senate plenary to plot change of leadership in the Senate, Ibrahim said he was not quartered anywhere.

He said, “I slept in my house. I was here in my office and left by 2pm. I was not quartered anywhere.”

He said, “The impeachment of the president should have started Thursday. Everybody was planning. We know they were planning.

“They realized and learnt that we know. They knew that if they had remained up till today (Wednesday) a lot of things would have happened.

“Saraki and Dogara should resign today or the APC should send them away. They are no longer APC members.

“The only reason why Saraki and Dogara have not left the APC is that they know that if they leave they will lose their seats. But we will force them to leave.

‘Left to me, I will recommend to APC to expel them. They are no longer needed in the party. We will be cured of cancer if they leave.

Ibrahim insisted that the departure of Saraki and Dogara will not affect the electoral chances of APC.

He noted that if Saraki leaves APC, the party may lose Kwara and Kogi States and no more.

He continued, “My position is that Saraki and Dogara should leave the APC. We can no longer trust or discuss APC issues with them again. We cannot afford to continue to habour moles in our mist.

“Let people be courageous enough and be honest to themselves. We will not miss them.”