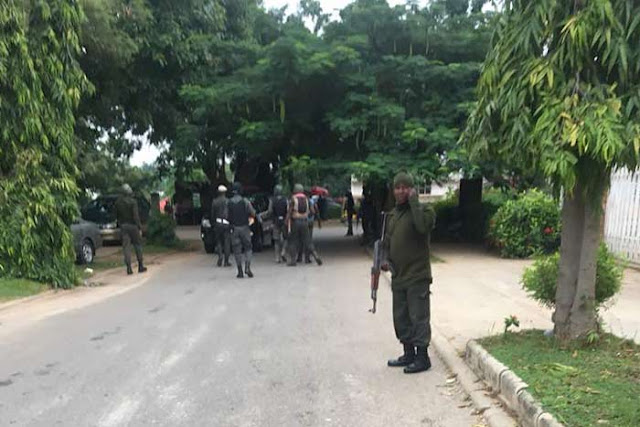 Security operatives on Tuesday morning blocked the convoy of the President of the Senate, Bukola Saraki, on its way out of his residence in Lake Chad, Maitama area of Abuja. The security operatives laid siege to the street for about two hours.

Also at 7 am, operatives of the Economic and Financial Crimes Commission and policemen laid siege to the Apo Legislative Quarters residence of Deputy President of the Senate, Ike Ekweremadu.

The security and anti-corruption agents blocked both ends of Jim Nwobodo Street where his house is located.

The developments had generated an uproar in the Senate and other quarters in the country.

The police had on Monday invited Saraki for interrogation over the bank robberies at Offa, Kwara State, on April 5, but the Senate President had in a statement said the invitation was a ploy to stop the defection of some senators on Tuesday

On his part, the EFCC is investigating the deputy senate president over allegations of money laundering.

While the siege to Saraki’s house lasted for two hours, the EFCC operatives did not leave his deputy’s residence until about 3 pm.

A few hours after the siege, the Presidency said President Muhammadu Buhari would not influence cases involving very important persons.

But groups and individuals including the Peoples Democratic Party’s National Chairman, Prince Uche Secondus and the Christian Association of Nigeria berated the Presidency.

Policemen attached to the EFCC said they laid siege to the Deputy Senate President’s residence based on orders from the Presidency.

The policemen numbering over 25 said this while dispersing some youths who had staged a protest at the Apo Legislative Quarters to demand that Senator Ike Ekweremadu should be left alone.

The youth, who had arrived at the estate in two buses around 11 am, defied the rain, chanting protest songs.

However, some policemen immediately chased the youth out of the estate, asking them to take their protests elsewhere.

A police inspector wielding a teargas canister said, “We are under strict instruction from the Presidency and we will maintain order here at all cost. You better leave here immediately!”

When contacted on the telephone, the Spokesman for the EFCC, Mr Wilson Uwujaren, said he would find out what was happening.

However, attempts to speak with him later proved abortive as his phone indicated that it was switched off.

In a letter signed by the Director of Operations of the EFCC, Mohammed Abba, with a reference number, ‘CR.3000/EFCC/DOPS/Vol.49/40 dated July 24, 2018, the commission asked the Deputy Senate President to immediately make himself available for questioning.

In the letter titled, ‘Case of Conspiracy, Abuse of Office and Money Laundering’, the anti-graft agency said the request was made pursuant to Section 38(1) of the Economic and Financial Crimes (Establishment) Act, 2004.

At the National Assembly, the Senate protested the siege laid to Saraki and Ekweremadu’s homes.

Moving a motion, Senator Chukwuka Utazi (PDP, Enugu-North), said, “I want to talk about the incarceration of the Deputy Senate President who has lost his freedom. There are insinuations that today’s sitting is going to be turbulent. There are insinuations and people told me that today’s meeting will not hold; that they heard that some people are going to defect. Because of that, they don’t want him to come to the sitting; they also don’t want the Senate President to come, so that nobody will be here; that both presiding officers will not be here.”

Utazi prayed that the Senate demand that the security operatives be withdrawn. He also prayed that the lawmakers should go on their annual eight-week recess which was scheduled to start on Thursday. The prayers were unanimously granted.

Lawmakers who spoke on the motion also criticised the APC-led government and security agencies for their alleged clampdown on perceived opponents. The Senate adjourned plenary to September 25, 2018.

But the police threatened to compel Saraki to appear at the Force Intelligence Response Team’s office at Guzape Junction, Asokoro Extension, Abuja, for questioning over the Offa bank robberies.

The Force stated that it would not hesitate to use “the instruments of law to ensure compliance with the law.”

The police spokesman, Jimoh Moshood, in a statement in Abuja on Tuesday, explained that the FIRT detectives were expecting the Senate president to report for interrogation.

The police stance followed the refusal of the Senate president to honour the police invitation for the second time.

The Inspector-General of Police, Ibrahim Idris, had on Monday night asked Saraki to appear before the FIRT detectives for further clarification on his earlier statement in which he denied knowing the robbery suspects.

The IG in a letter dated July 23, asked Saraki to report to the police on Tuesday at 8am to provide further clarification to detectives on his relationship with the five leaders of the robbery gang.

The robbers had attacked some commercial banks in Offa, Kwara State, on April 5 during which nine policemen and 33 persons were killed.

Following the attack, the police arrested 27 suspects including five leaders of the gang and also recovered some AK47 rifles.

The police had said that their investigation into the matter showed that all the five gang leaders namely: Akinnibosun, Ibikunle Ogunleye, Adeola Abraham, Salawudeen Azeez and Niyi Ogundiran had a direct connection to the Senate President.

Subsequently, the Force invited Saraki for interrogation over his alleged links to the gangsters but later asked the Senate President to submit a written statement which he did, denying his involvement in the bank robberies.

Miffed by the Kwara-born politician’s action, the police in their statement insisted that the lawmaker must appear for questioning or risked being compelled to do so.

Moshood said, “The Nigeria Police Force’s attention was also drawn to the innuendos in the early hours of today (Tuesday) that some policemen were seen surrounding the residence of the Senate President; the Force wishes to categorically state that there was no authorised deployment of police personnel to besiege the residence of the Senate President or his deputy as reported in the media.

“The police personnel seen in pictures in the media were those in the convoy of the Senate President and others attached to him.”

However, the Inspector-General of Police has directed a thorough investigation to ascertain the facts in the episode.

He added that the Inspector-General of Police, Ibrahim Idris, had ordered an investigation to ascertain the facts, noting, however, that the “Force will not allow the end of justice to be perverted by this distraction.”

Buhari won’t influence cases involving VIPs —Presidency
On its part, the Presidency on Tuesday asked Nigerians to allow the security agencies to do their work without reading political meanings into their activities.

The Senior Special Assistant to the President on Media and Publicity, Garba Shehu, said this in a statement made available to journalists.

In a veiled reference to the travails of the President of the Senate, Bukola Saraki, and his deputy, Ike Ekweremadu, in the hands of security agencies, Shehu said the Presidency had taken note of what he called orchestrated campaign against President Muhammadu Buhari each time a Very Important Person is invited by the law enforcement agencies, in the discharge of their legitimate duties and functions.

He said the law of the land was intended for all, and not for the poor or those at the lowest rungs of the social ladder.

The presidential spokesman said, “It is odd, strange and bizarre that while ordinary citizens can be called up to answer questions or be interrogated, the VIPs cannot be questioned without the annoying insinuations of partisanship, persecution or outright politicisation.

“The workings of law enforcement agencies are set out in the constitution and the laws of the country. If they worked at the discretion of past presidents, who decided who to question and who to detain, Nigerians should get used to the fact that this President is different. President Buhari does not and will not influence or interfere with cases.

“The constitution clearly directs law enforcement agencies to promptly report and investigate any actual or potential infringement of the law and also initiate proceedings against all those involved.

“This President is not the one who directs them on what to do.”

Buhari on Tuesday met behind closed doors with the Inspector-General of Police at the Presidential Villa, Abuja.

The agenda of the meeting was not made public.

The meeting was, however, held a few hours after news broke that security operatives laid a siege to the residences of the President of the Senate and his deputy.

It also came a day after the police high command invited Saraki again for questioning over the recent Offa robberies.

But the National Chairman of the Peoples Democratic Party, Prince Uche Secondus, urged Nigerians to caution Buhari, alleging that his actions were detrimental to the survival of democracy in the country.

He said, “The APC government, led by President Muhammadu Buhari, is using state security apparatus like the Nigerian Army, Department of State Services and the Nigeria Police to attack the National Assembly with the aim of forcibly overthrowing its leadership and rendering the third arm of government comatose.

“It is now a known fact that democracy has now collapsed in Nigeria and we are now under a totalitarian and fascist government with no appetite for the opposition.”