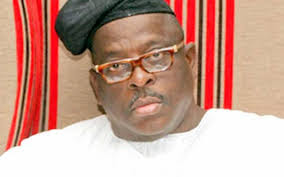 
Buruji (Ogun East) was expelled along with his assciates – Semiu Sodipo, Adebayo Dayo and Segun Seriki – all members of the Ogun State chapter.

Ologbondiyan said the NEC took “the disciplinary action against its members who have been hobnobbing with the All Progressives Congress (APC) in ways that were detrimental to the interest of the PDP”.

In a swift reaction last night, the senator said his expulsion cannot stand.

In a statement last night, Kashamu said: “My attention has been drawn to the purported decision taken by the National Executive Committee (NEC) allegedly expelling me and the other chieftains of the Ogun State chapter of the Peoples Democratic Party (PDP) from the party.

“It is clear from the ill-advised decision that the Secondus-led National Working Committee is lawless and undemocratic. No due process was followed as enshrined in the constitution of the party. Since the initial 30-day suspension lapsed on January 9, 2018, they do not have any right to take any disciplinary action against me. This decision cannot stand because Article 57 (6) of the PDP Constitution says ‘Any decision taken against a member who has not been informed of the charges against him or has not been given any opportunity of defending himself shall be null and void'”.

He added: “Besides, there are no less than two suits challenging my initial suspension. The first is Suit No. FHC/L/ABJ/CS/1254/2017 between Senator Buruji Kashamu Vs. PDP, Prince Uche Secondus, the National Secretary and INEC before the Honourable Justice Ahmed Mohammed of the Federal High Court, Abuja.

“PDP should not forget that it also instituted a case against me and other leaders of the party in the South West at the High Court of the Federal Territory in Suit No. FCT/HC/CV/0303/2017 as per the Honourable Justice Valentine Ashi in which the court made an order nullifying and setting aside my purported suspension on the 9th of January, 2018.

“Therefore, the purported expulsion cannot stand in the face of the Rule of Law. It is null and void. I and my associates are fully in the PDP whether anybody likes it or not. We will continue to operate with the law as PDP members, senator and exco.”