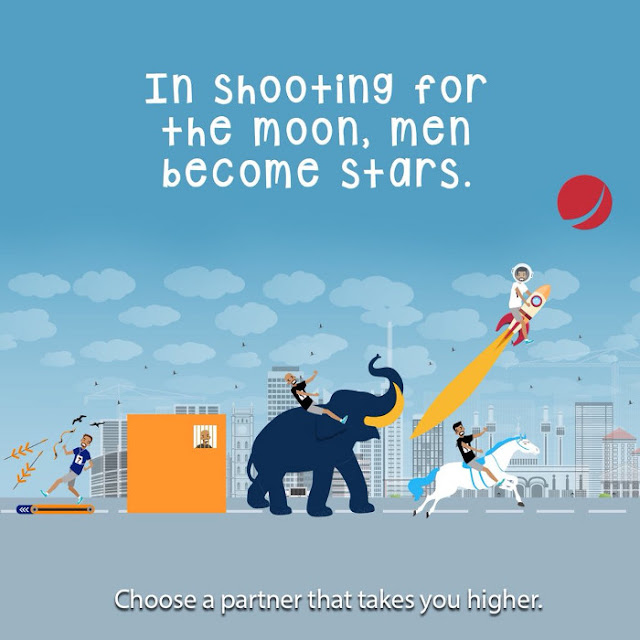 Nigerian banks on Saturday engaged in a social media battle, throwing banters at each other on their Twitter handles. Some seem to be winning and others are at the receiving end.


The beef apparently started when Sterling bank took to its twitter handle @Sterling_Banking to post a picture with the inscription: “In shooting for the moon men become stars”

They had below the picture, logos or illustrations that clearly depicted some other Nigerian banks.

First from the left was a man rocking a boat that had the colours used by Access Bank and having symbols contained in Access Bank logo. The next icon was an orange coloured brick (GTB uses orange as its main colour): then a man riding an ‘elephant’ which is majorly used by First Bank, then another man on a rocket coloured in Sterling Bank’s primary colours, heading to a red moon (Sterling bank’s logo): this was then followed by a man riding a white Horse (Horse is the main logo of Union Bank).


Below the picture, another inscription read: “Choose a partner that takes you higher.

Shoot for the moon, become a star - it's the least you deserve. Welcome to #SterlingBank 😊 pic.twitter.com/Jt7M5AkSSb
— Sterling Bank Plc (@Sterling_Bankng) July 20, 2018

First Bank took to its twitter handle @FirstBankngr to tweet a ‘clapback’: “What an elder sees while sitting, a child cannot see even if he travels to the moon. #RespectYourElders #YouFirst


What an elder sees while sitting, a child cannot see even if he travels to the moon. #RespectYourElders #YouFirst
— FirstBank Nigeria (@FirstBankngr) July 21, 2018


Still not satisfied with the “comeback”, First Bank again tweeted, this time a GIF image of a rocket crashing right from the skies. The GIF had the inscription: “Mr Burns Groaning.

Access Bank also followed suit with a comeback punch line when it took to its twitter handle, @myaccessbank to write: “We will travel on an imaginary rocket too, if we were a one-customer Microfinance Bank; but with ten million customers and counting, we rather bring the galaxy to you!.”

We will travel on an imaginary rocket too, if we were a one-customer Microfinance Bank; but with ten million customers and counting, we rather bring the galaxy to you! #YouAreWorthIt #TakeTomorrow #KnowYourElders pic.twitter.com/pBGuW8JaLo
— Access Bank Plc (@myaccessbank) July 21, 2018

Union Bank on its part took to its twitter handle @UNIONBANK_NG to take multiple jabs. First it wrote: “Heading to the moon without a spacesuit…journey mercies.”

It went on to tweet another jab where it wrote: “When the elders speak… #SimplerSmarterSAFERBank” with a picture of a dog holding using its paws to close the mouth of another dog.


As if it was not enough, Union Bank went on to tweet: “There’s no coming back after “Ether” or “Story of Adidon”…settle down now, take a deep breath. Back to counting this Naira, Dollars and Pounds…


There's no coming back after "Ether" or "Story of Adidon"...settle down now, take a deep breath. Back to counting this Naira, Dollars and Pounds... #SimplerSmarterSAFERBank pic.twitter.com/LGSRSsOPtw
— UNION BANK (@UNIONBANK_NG) July 21, 2018

‘Ether’ was the title of one of the best ever dis tracks, where American Rap artists Nas dissed another rap artist Jay-Z, a track which many rap analysts said there was ‘no coming back from’.

A twitter user who sought to know who was the elder among the banks that spoke of themselves as elders also got a punchline response from First Bank which wrote: “Even fathers have fathers; they are called ‘forefathers’. #Babababawon #YouFirst.

FCMB (First City Monument Bank) on their own part were glad to observe the 'social media bank war' as a spectator since they were not dragged into it yet.


GTB (Guaranty Trust Bank), although were dragged into the social media fight have chosen to ignore the banter by Sterling bank so far.

The Fight may not be over as of yet as some of the banks that were depicted in the original post are yet to respond to the tweet as at the time of this report.

So who is the winner of this bank fight on social media in your opinion?