How we abducted Chibok girls in 2014 — Boko Haram commanders 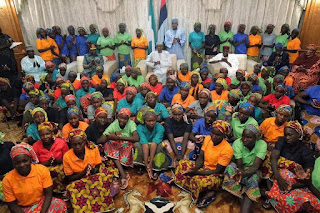 Following the recent arrest of 22 members and commanders of the Islamic sect, Boko Haram, by operatives of the Inspector General of Police Special Intelligence Response Team, IRT, shocking revelations have emerged on the murderous activities of the sect.


It was gathered that three commanders of the Civilian Joint Task Force, an outfit created by the Borno State Government, to assist the Nigeria Military in trailing and arresting members of the sect, were among those arrested by the IRT, for giving out operational information of the military   to members of the sect.

Eight other suspects also confessed during interrogations that they were part of the group that carried out the April 2014, kidnap of over 200 schoolgirls from a government secondary school, in Chibok area of Borno State.

When Vanguard interviewed the suspects, some of the commanders, foot soldiers and informants narrated their roles and the various tasks executed for the group.

Maita Alhaji Modu alias Abu, a   20-year-old Boko Haram commander from Bama Local Government of Borno State,  who was a farmer and had no formal education confessed that he took an active part in the 2014 kidnap of Chibok schoolgirls and he was equally responsible for moving young girls who were used for suicide bombings  from Sambisa Forest into Maiduguri Town.

He said as  a commander, he had been fighting for the sect since 2011 and assisted the group in taking over several towns, villages. He said he also participated in ambush attacks across the Northeastern states of Nigeria and some parts of Niger, Chad and Cameroon.   He disclosed that the leadership of the group usually paid each fighter the sum of N30,000 after each attack.

Narrating how the group carried out the April 2014 Chibok school girls attack, he said; “one of our commanders, who received direct orders from our leader, Abubakar Shekau,   Bana Chungori, called out over 100 of us and we all assembled at the   Sambisa Forest.

He told us that our leader, Shekau had ordered that we should all go to Chibok Local Government and kidnap some school girls at the school. We couldn’t ask questions, because it was a direct order from Shekau and we all mounted our trucks.

We had five big military trucks, three Toyota Hilux vans and two Isuzu pickup trucks. We left Sambisa Forest around 5pm that evening and arrived the school around 10pm.

We surrounded the school when we arrived and when we were certain that there would be no resistance, Chungori gave orders that we should all go in and we found the girls running in fear. We kidnapped many of them and took them away in our trucks.

When we got to the entrance of the Sambisa Forest, Chungori asked all the foot soldiers and other lower commanders including me to leave the truck because he was to take the girls to Shekau, whose camp was deep inside the forest.

I didn’t see the girls again because I was not close to Shekau, but I was paid the sum of N30,000 on the day of the kidnapping and I was also given the sum of N60,000 after a set of ransom was paid for the release of the girls.”

Abu also said; “sometime in December 2014, two of our top commanders; Bakura and Ibrahim, ordered me to take two girls with suicide vests to Maiduguri town and supervise them until they had detonated their bombs.

But each time I got to Maiduguri, I would not go into the Metropolis with them and I would leave them at the outskirt of the town and before you knew it they would have detonated their bombs. The first one they did was at Muna garage and the second was at Dalori which was also on the outskirt of Maiduguri town.

A member of the group, Adam, who had a taxi in Maiduguri, then called our commander and told him that the suicide bombers I had been bringing in had been unable to enter into the town where they were large crowds of people and since he was a taxi driver, he could always help us locate densely populated areas where people could be killed in larger numbers, if only my commanders would pay him.

They agreed on N200,000 per mission and each time I took the girls from Sambisa forest, I would   take them to Adam, who would then take the girls into Maiduguri metropolis and after each successful attack, I was the person who used to take his money to him.   My commanders used to pay me between N60,000 to N70, 000 after each operation. I wasn’t doing this because of my Islamic faith, I was just doing this because of the money.” he stated.

I was paid N200,000 to take suicide bombers to target locations—Mustapher

21-year-old Adam Mustapher, a native of Maiduguri told Vanguard that he joined the sect in 2009 when Mohammed Yusuf, its founder was alive, but he didn’t take part in the fight at the beginning, because he was too young. But he said he became attracted to the group in 2014 when he realized people were making money from the group’s activities.

He also confessed that his job as a member since 2014 was to take young girls being used for suicide bombings to their target locations and he normally earned N200,000 for each operation; “I attended only an Islamic school and I didn’t complete my education.   I am a taxi driver and I have been in the business in the last four years.   I joined the Boko Haram Sect in the year 2009 when the founder Mohammed Yusuf was still alive.

I used to pray with the sect in their mosque but I didn’t join in the fight from the beginning, I went underground. But I rejoined the group four years ago when one Ibrahim, a member of the group approached me with the idea of buying stolen cows and other livestock from the group, which I would sell in Maiduguri.

I made so much money from the business, but that my friend Ibrahim was later killed during an encounter with some soldiers. I bought a vehicle with the money I made and the group then gave me a new assignment which was for me to always convey suicide bombers, who were mainly young girls, from the Sambisa forest, with their suicide vests to their target locations.

The person   who normally took the girls from   Sambisa forest to Muma Garage in Maiduguri, where I would pick them up, was one Abu, who has also been arrested.  Sometimes I got instruction from Sambisa forest on where the suicide bombers would attack and where there was none I would take them to any area where I felt the casualty figure would be very high.

But my targets were usually densely populated areas and before I received the girls from Abu, I normally drove round the town to find areas that were populated.

I took the suicide bombers to several places such as Post Office area of Maiduguri, where they carried out attacks, I also took them twice to Baga Road, Monday market, 33 Army barracks, and several other places where so many people lost their lives during the attack.  I was usually paid N200,000 after each successful mission.

My last mission was on the 10th  of May 2018 in an operation we carried out at 33, Army Barracks in Maiduguri.     In one of my operations on Baga Road, one of my younger brothers was killed during the suicide bomb attacks, I felt very bad about the incident and I wanted to quit but I couldn’t because the money they promised me was tempting.   But I regret everything I have done now. I don’t know how the police learnt about me, I was in my house when they came and arrested me.”

I met the group through one Arramma, who brought one Abu to me and they asked me to buy some stolen rams and goats from them. I bought the livestock for N22,000 and then they told me that they were members of the Boko Haram.

They then requested me to be their supplier.   Sometimes they brought money to me from the Sambia forest to help them buy food items and other things they would need and after buying the items, I would keep them in my house and call them on the phone to come and pick up the items.

They would then come at night to carry the items.   They usually paid me the sum of N100,000 on each trip. But in the month March they brought some diamonds for me to sell for them and they also linked me to one Alhaji Talba Gonie, who resided at Zageri Ward, on Baga Road, who they said knew how to sell the diamonds.

After selling the diamonds, Alahjai Talba Gonie would hand over the money to me and the sect members would instruct me on what they needed me to buy for them with some of the money after which they would come and pick them and the balance of their money. I sold the diamonds for them on five occasions and they rewarded me handsomely, but I don’t know where they got the diamonds from. I bought a land with the money I made from my dealings with the group.

But I am regretting my actions because I was once a Boko Haram victim as they killed my uncle and his son, when they attacked my village in 2014 but the money they offered to pay me if I became their supplier was so tempting. Even my wife wasn’t happy that I joined the group but there was nothing she could do about it”, he lamented.

Mohammed Bashiri, 34-year-old member of the civilian JTF, which was set up to work against the Boko Haram sect, said he opted to work for the sect, because he was not earning any money as a Civilian JTF but the sect was ready to pay him for information he passed across to them.

According to him,  “I was part of the group that formed civilian JTF in 2012, and I also joined the military in fighting against the sect, but the government was not paying me then and I was forced to join Boko Haram.   It was one Adam who lured me into the group and I became his informant.

I used my position as a civilian JTF to pass information to him and whenever he wanted to take supplies to Boko Haram in Sambisa forest, he would need me to give him information about movement of military men.

He used to pay me N10,000 on each information I gave to him and he promised that the group would soon reward me handsomely.