How I escaped from kidnappers, spent 11 hours on top of a tree - Dino Melaye reveals 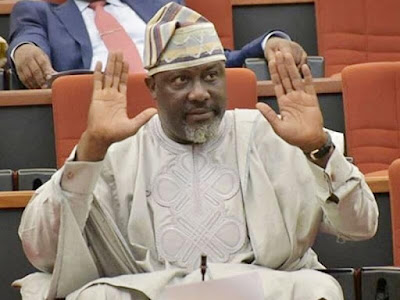 A Nigerian senator who was feared kidnapped earlier this week has provided a detailed account of his unpleasant experience, revealing how he spent 11 hours at the top of a tree to escape from the kidnappers.

Dino Melaye, representing Kogi West Senatorial District, was widely assumed to have been abducted after his associates claimed he ran into unknown assailants as he travelled towards Kogi State.

One of his Senate colleagues, Ben Murray-Bruce, who alerted the public to the development on Thursday morning, said the incident occurred along the Abuja-Lokoja Highway.

Mr Melaye’s aides and family members later told newsmen the senator was attacked shortly after Gwagwalada, a major town in the FCT and home to the University of Abuja, while travelling to Lokoja.

The senator said he was on his way to court for a third appearance in his ongoing trial for alleged criminal conspiracy.

News of the purported abduction spread quickly, and many started drawing divergent conclusions as to what might have happened.

His spokesperson, Gideon Ayodele, revealed that the violence was reported at Gwagwalada police division, but did not elaborate on the specific account provided to the police.

As at early Thursday afternoon when the news had become a trending topic, the police did not issue any statement on the reported attack on the senator.

A statement later came in later Thursday, in which the police cast strong doubts about Mr Melaye’s abduction and also denied claims by Mr Melaye’s aides that the matter was reported.

The police, however, said they would investigate Mr Melaye’s whereabouts and rescue him if necessary, urging citizens with actionable information to pass such to authorities.

A police source later revealed on Friday morning that plans were underway to uncover Mr Melaye’s location, especially since his family members did not say they received calls from anyone for ransom.

But just before noon on Friday, Mr Melaye, whose social media accounts were missing in action since Thursday morning, suddenly posted an update on Twitter, announcing he had escaped attack and thanking the public for showing concern for his safety.

The announcement shocked many, especially since there were already assumptions that Mr Melaye might have faked his own abduction to excuse himself from court appearance.

Sources close to him also hinted that Mr Melaye had called in to inform them that he had escaped an attack, but needed time to recover from the shock before telling the public.

Several conspiracy theories about what happened to Mr Melaye quickly shaped up, and by weekend, some of them, especially the part that said he made a poor attempt at escaping court appearance, had become entrenched in the Nigerian social media.

In a lengthy discussion with newsmen on Saturday afternoon, Mr Melaye narrated his own version of what he said unfolded along the Abuja-Lokoja Highway.

In all, he confirmed he was not abducted, but that he was not the architect of his ordeal either.

He said he was travelling from Abuja to Lokoja for a court appearance on Thursday morning and shortly after passing Gwagwalada, which is roughly 50 kilometres southwest of Abuja, a convoy of three vehicles drove recklessly by his vehicle, intercepting him on the highway and forcing him to stop.

He said the assailants tried to open fire to force themselves into the vehicle, only to realise that it was a well-fortified vehicle with bullet-proof. Without much time to waste at the scene, the attackers devised an alternative.

“They started shouting that they wanted to burn me, they said ‘burn him, burn him down,’ and crossed the road to look for tyres to set the vehicle on fire,” Mr Melaye said.


As the attackers dispersed in different directions to scavenge for tyres, Mr Melaye said he feared for his life and made instinctive calculation to jump into the bush and bolt, rather than remained in the car in defiance.

“I jumped into the bush, and I started running,” Mr Melaye said. “They pursued me and I was able to outmanoeuvre them and climb a tree.

“I was on top of the tree when I saw them run past looking frantically for me. When they didn’t find me, they also ran back.”


The senator said it was on the tree that he perched until his assailants left. While on the tree, he saw four of them passing, but remained hushed to avoid being detected.

He would go on to spend 11 hours trying to ensure that he was no longer at immediate risk from his assailants and navigating his way out of the overgrown weeds.

He also said he could not identify any of them, even if there is an identification parade by authorities, largely because he was more apprehensive of his survival than anything else at that traumatic moment.

Mr Melaye said he believed those who attempted to attack him were police-sponsored elements.

He said when he appeared in court on Wednesday for his attempted suicide trial at the Federal Capital Territory High Court in Apo, he saw some men trailing him after the proceeding.

He described the vehicles the men were driving as two Toyota Hilux trucks and a Toyota Sienna minivan.

“They were exactly the same vehicle that were used to attack me on Thursday morning,” he said.

He was driving to Lokoja in a vehicle not previously known with him, in a bid to disguise his move to those who were trailing him.

“I was going in a totally different vehicle, but I asked my brother to drive behind me in an SUV as a back-up,” he said. “But I was shocked to see the attackers run into the middle, creating wall between my brother and I before attacking me.”


He said his brother immediately performed a U-turn, a task that was by and large seamless since he was not the target of the assailants.

Mr Melaye said he is still being haunted by the event of four days ago, and called on Nigerians to prevail on federal authorities to restore his security.

He urged citizens to disregard the claims that he was somehow involved in planning the attack on him.

“It defies logical, the claim is illogical,” Mr Melaye said.


“To begin with, the federal government and the police in particular have combined five cases against me in court,” Mr Melaye said. “I have never declined to appear in court for trial in all the five separate cases.”


He said the claim that he was trying to avoid court appearance should immediately ring false to lucid minds, especially since he was in court just a day before.

Besides, Mr Melaye said, the court appearance in Lokoja was more about symbolism than substance. This was because he had learnt from his lawyer, Mike Ozekhome, that the case would not be heard on Thursday because prosecution lead had already written to notify of his unavoidable absence and seek adjournment.

“Alex Izinyon is the prosecutor and he had written to my lawyer to inform him that he would not be in court on Thursday and that the judge should adjourn the matter,” Mr Melaye said.

“So why would I not want to be in court when I know that nothing would happen to me?” Mr Melaye said.


Moreover, Mr Melaye further said that Nigerians should remember that he was granted bail by the same court in Lokoja, which he had continued to enjoy and had made three previous appearances.

“I have been attending all previous court hearings. I have been told that the prosecutor wanted an adjournment. I have been granted bail long ago which I continue to enjoy. So why would I not want to go to court that day?”
“There is no sense in that claim. It is completely against logic,” Mr Melaye said.


Mr Melaye said as a citizen, he is entitled to security if he informed the authorities of a credible threat to his life.

“So now that I am even a senator of the federal republic, how do you withdraw my security and leave me exposed, especially when I have escaped four previous assassination attempts?” Mr Melaye said.


He said his security was withdrawn on April 22, at the peak of his confrontation with the police over alleged complicity in a series of capital offences traced to some persons the police identified as hardened criminals who once terrorised Kogi State.

The suspects were arrested and they allegedly named Mr Melaye as their sponsor who supplied them with arms and funding. Mr Melaye strong rejected the claims, but the police continued to see him as a suspect, and later arraigned him in Lokoja.

Mr Melaye said he had made several attempts to have police detail restored, but all without luck.

He also decried his vulnerable security during a plenary at the Senate, which lawmakers promptly responded to by passing a resolution on July 11, calling on the police to provide security for him.

“I also asked for security from the Civil Defence authorities, but they refused to provide it because of the powers that be,” he said.


Mr Melaye vowed that he would not stop criticising President Muhammadu Buhari, no matter the cost to his personal comfort and safety.

“If I die today, 100 Dinos will rise tomorrow and take my place,” the senator said.


What are your thoughts? kindly share with us below...