Fayemi warns against illegal appointments at college, others 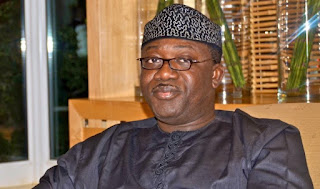 The Ekiti State Governor-elect, Dr Kayode Fayemi, has warned the management of the College of Education, Ikere-Ekiti, to stop working in cahoots with Governor Ayodele Fayose to embark on illegal mass employment at the college in exclusive favour of the governor’s supporters.


A statement by the Director of the Media Office, Wole Olujobi, cautioned the management of the college to steer clear of actions capable of crippling the administration of the Governor-elect.

The statement added that there were similar plans by Fayose for other government agencies and institutions where the governor planned to dispense favours to only members of his party.

Fayemi warned that political consideration in public recruitment scheme was illegal and would be so treated on assumption of office.

He also frowned on the election of political structures in non-partisan institutions of government, warning that the incoming administration would not inherit institutions that would be threatened by political cleavages.

“We are aware of a long list of cronies of Governor Ayodele Fayose who are forced on the management of the College of Education and waiting to be employed in their large numbers on the orders of the governor.

“We wish to caution the management of the College of Education, Ikere-Ekiti, and other institutions of government on the danger of conniving with an administration that has refused to employ just one man in about four years to now choose to embark on mass recruitment of supporters for the purpose of crippling the incoming administration at a time that Fayose’s administration is owing backlog of salaries with no hope of payment till the end of his administration.

“We hereby alert the people of Ekiti State to this clear act of sabotage which the management of the college is trying to execute on behalf of Governor Fayose to intentionally cripple the smooth running of the administration of the college when the new administration comes on board, particularly coming at the time that subvention to the college has not been paid for long while research and capital funding has been abandoned.

“The recruitment becomes more illegal, as the beneficiaries of the exercise are mainly Fayose’s cronies whom he wants to compensate after deceiving them for three years.”

But reacting, Fayose through his Chief Press Secretary, Mr Idowu Adelusi, said Fayemi was only being haunted by his past.

He said, “When Fayemi lost the election in 2014, he embarked upon a reckless recruitment and brought many APC members in. When we assumed office, despite the fact that he left the state in a huge debt, we did not sack any worker but we couldn’t employ. He did that to sabotage our administration. So what moral justification does he have to question us?

“In any case, we are not a reckless government and won’t do things their way. This government is for all Ekiti and will do only what is right at the right time.”