Ekiti situation has worsened in the past four years - Fayemi laments 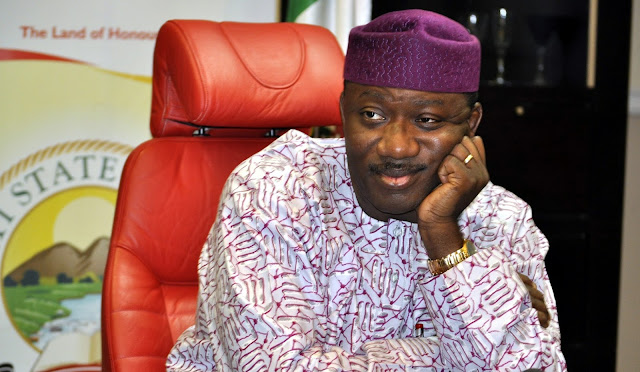 Ekiti State Governor-elect Kayode Fayemi has said he is ready to tackle the challenges confronting the state.

He said the fiscal, economic and social conditions of the state had worsened in the last four years.

The governor-elect sought the cooperation of residents to get the state out of the woods.

Fayemi advised the outgoing Ayo Fayose administration to use 80 per cent of allocations expected from the Federation Account to pay the backlog of salary owed workers before the October 16 handover.

The governor-elect spoke yesterday at the inauguration of the 32-member Transition Committee to facilitate the smooth transfer of power.

The committee has Senator Olu Adetunmbi as chairman. A retired Permanent Secretary, Mr. Deji Ajayi, is the secretary.

Fayemi stressed the recommendations of the committee would be far-reaching and serve as template to tackle challenges confronting Ekiti.

The governor-elect expressed dismay that the state had retrogressed in the last four years.

He said: “Our situation has become worse since we left government. It seems as if we are starting from the scratch. We must hit the ground running when we are sworn in on October 16.

“We need to ameliorate the unfortunate situation our people have been put into. We have no reason to disappoint our people.

“The debt profile is one of the areas the committee will look into. The Debt Management Office, I suspect, has given us underestimation (on the debt profile). There is no reason the outgoing administration should not cooperate with the transition committee.

“I really like to appeal to the outgoing administration to prioritise salary payment to civil servants and pensioners. The important thing now is: whatever that is coming to the state, 80 per cent of it should go into payment of salary arrears. To me, that should be a priority.

“Let me say this: neither my deputy governor-elect, Chief Bisi Egbeyemi, nor myself consider ourselves as having repository of knowledge or have answers to all Ekiti’s problems. So, we are relying on your wealth of experiences.

“In your report, tell us those things we should not lay our hands on at all. Also endeavour to indicate those things we can do to have immediate impact on our people when we assume office. That is the most important thing to the incoming government.

“If you look at the configuration of this committee, we have more financial experts with deep knowledge of fiscal issues. There are four former commissioners, because finance is the main thing in Ekiti on the premise that our situations have worsened than we left it in October 2014.

“Our people are in a serious mess. Poverty has risen and we have to move fast and ameliorate their sufferings.

“I want to appeal to the present government, particularly Ekiti State workers, to cooperate with the committee in the spirit of patriotism. They should think more about Ekiti interest than that of any individual.

“I see no reason why Fayose’s government would not want to cooperate with you because this was what we did in 2014 and which the whole Nigeria commended.”

Adetunmbi said the team was aware of the huge task before it and craved the cooperation of the outgoing administration.

He said: “We want to assure the good citizens of Ekiti State that we are not going to act as enemies or adversaries. We are going to be friendly and that we shall do for the benefit of our state.

“We are coming as friends, not as enemies. We expect maximum cooperation from them so that the new government can start without any hiccup.”