The family of the detained former National Security Adviser Colonel Sambo Dasuki (rtd) has formally dragged the Attorney General of the Federation and Justice Minister, Abubakar Malami, SAN, before the Nigerian Bar Association (NBA) demanding sanction of the minister for “utter disregard to the rule of law”. 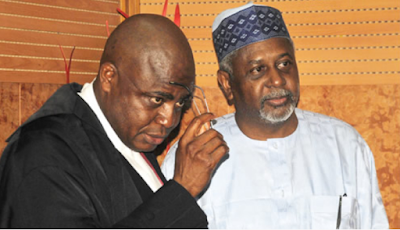 The family in a petition accused Malami of exhibiting unprofessional conduct likely to cause anarchy in the country through his “promotion of disobedience to lawful order of court by the Federal Government”.

Recalling how their son served Nigeria for 21 years as a courageous officer in the Nigerian Army, Managing Director Nigeria Security Printing and Minting Company (NSPMC) and later as National Security Adviser to the immediate past administration, they stated that Dasuki has never been convicted of any crime till date.

The petition signed by his wife, Hajia Bintu Sambo Dasuki, his son, Abubakar Atiku Dasuki and his nephew, Senator Umar Dahiru explained how the ordeal of Dasuki started when Buhari’s government came on board with unlawful invasion of his houses in Abuja and Sokoto during which properties vehicles were carted away by the operatives of the Department of State Security Service (DSS).

The petition also chronicled how Dasuki was arraigned before a Federal High Court and other High Courts of the Federal Capital Territory on various charges but was granted bail by the judges.

It indicated that Court of Justice of the Economic Community of West African States (ECOWAS) was approached and that in the landmark judgement of the court, the detention of Dasuki was declared unlawful, null and void, while a fine of N15m was slammed on the Federal Government.

The Dasuki’s family noted that upon meeting the bail condition, the warrant of release of Dasuki on bail signed by the Court was served on the Director General of DSS and the Attorney General for their compliance with the order of the court.

The NBA was prayed to invoke laws on Code of Ethics on professional code of ethics against Mallami, investigate him and impose deserved disciplinary sanctions against him in order to safeguard the rule of law for the country.

The family also asked the NBA to intervene in the ordeal of Dasuki and speak out and take decisions and actions that will compel the Federal Government to respect the rule of law and obey the order of the court that admitted him to lawful bail.