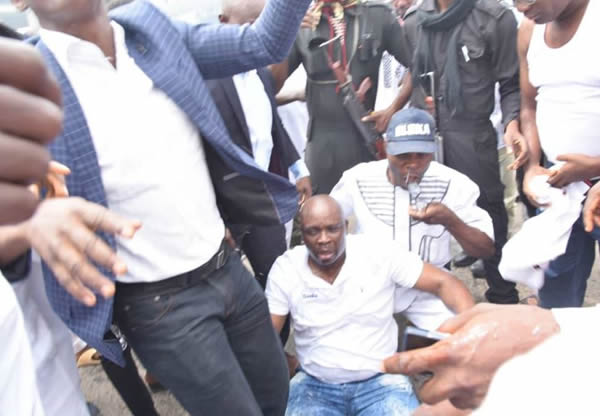 Ekiti State Governor Ayo Fayose sparked a huge controversy yesterday when he claimed that the police attacked him.


The governor claimed that the police shot at him and fired teargas that blinded him in Ado Ekiti, the state capital.

But the Police said the governor was not attacked.

They said policemen fired teargas to disperse a crowd of people after they had been advised not to hold a rally.

Reporters who were at the Police Headquarters rushed down to the Fajuyi Pavilion, venue of the planned rally when the news broke that the crowd was being dispersed.

A Peoples Democratic Party (PDP) source claimed that Fayose was attending to complaints from members who had been denied access to the pavilion when a teargas canister fired from outside the Government House landed very close to him. The governor inhaled the teargas and went down, he said.

Asked if other people with the governor did not inhale the teargas, the source did not reply. He said Fayose was taken to the Government House Clinic.

The governor later emerged from the clinic with neck brace to address the crowd that gathered at the Government House.

Another source said the police did not enter the Government House, adding that “nobody beat His Excellency” who had his security details with him.

Deputy Governor and PDP candidate in Saturday’s election, Prof. Kolapo Olusola, also alleged that he was beaten by policemen.

The police said they stopped the PDP rally for security reasons and to maintain law and order.

Deputy Inspector General of of Police (Operations) Habila Joshak said the PDP neither sought for nor got permit for any rally.

Joshak said no unauthorised rally would be allowed in the state before Election Day on Saturday because of the prevailing security situation.

It was leant that the APC leadership wanted to organise a road show which the police declined to approve. It was promptly cancelled.

The Police Headquarters said “In furtherance to the presence of police officers around the Prof. Olusola Eleka pavilion at Fajuyi today (yesterday), two political parties intend to have their rally at the same date and in Ado-Ekiti metropolis but the commissioner of police advised the political parties in writing on the need to have theirn political activities at diferent time and because of the security implication.”

Prince Dayo Adeyeye, who defected to the All Progressives Congress (APC) after the Peoples Democratic Party (PDP) primaries, described Fayose’s claim as the latest “stunt” from “a clownish dramatist.”

It was not clear yesterday why it was only the governor who inhaled the teargas and how he got his neck injured as he addressed the crowd at the Government House wearing a neck collar.

The Yoruba Council of Elders (YCE) called for peace in the state.

He called on Fayose and Ex-Governor Kayode Fayemi “to caution their teeming supporters against violence.”

Speaking later, Fayose said: “My people, the Lord will fight this battle; the MOPOL of Nigeria Police, IGP and AIG ordered that the governor should be killed.

“I was slapped by a policeman. I was kicked and I was shot at. Be of great courage, be not dismayed, this battle will be won.

“This is an army of occupation. This is not the democracy we fought for. My people, don’t be afraid. I pray they will not cause the 1983 problem in Ekiti State.

“Ekiti is under siege. How can I be governor of Ekiti State and they treated me like this? My people, stand and keep standing. I will go back to the hospital and remain there. I want you to stand by Eleka (Olusola).

“I plead with the international community: Nigeria is in trouble, please arise and stand for justice. They have arrested so many teachers, okada riders and PDP members.

“Come and save PDP. We are in majority. We are a party to beat. Come and save us. They said they are under instruction to kill me and PDP candidate.”

Fayose wept while being interviewed by journalists.

Olusola said: “They shot sporadically into the air and one of them beat me. I told him that I am the deputy governor, he said deputy governor my foot.

“We had not moved out to the streets at all; we were walking to our campaign office. The COMPOL (Commissioner of Police) MOPOL (Mobile Police) said to my hearing that it was an instruction from the Presidency.

“They manhandled my governor and slapped him with the butt of the gun in the back. It was an attempt to assassinate the governor but they will never succeed.

Ekiti PDP Chairman Gboyega Oguntuase accused the Inspector General of planning to rig the election for the APC.

Oguntuase said: “When the IGP was CP in Kano State, democracy was bastardised; votes in Kano were rigged.

“This election shall hold and be won by people who are behind PDP.

Presently, the police are laying siege to the Government House.”

Senate Deputy Minority Whip Mrs. Biodun Olujimi said PDP members still have the right to hold rallies because the time frame allowed by the Electoral Law had not lapsed.

Soldiers and policemen had taken over the Fajuyi Pavilion.

They parked their vehicles inside the arena and kept guard over the facility. An Armoured Personnel Carrier (APC) was stationed there.

The security men said they were under instruction not to allow any rally because of the tense situation in the state.

PDP members, who arrived the place in their white apparel as instructed by the governor, were turned back.

A close aide to Fayose, Abiola, was arrested. He is being detained at the Criminal Investigation Department (CID) Section at the Police Headquarters in Ado-Ekiti.