Minister of Labour and Employment, Dr. Chris Ngige has faulted the stand of the Chairman of the All Progressives Congress (APC), Comrade Adams Oshiomhole on the constitution and inauguration of the board members of federal agencies and parastatal under his ministry. 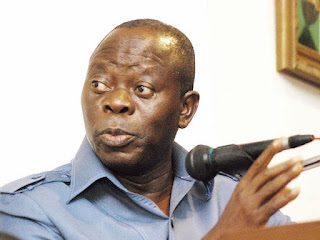 The APC chairman, in a letter, had given the labour minister one week within which to constitute the board of the parastatals and agencies under his ministry.

But, Ngige, in his reply, explained why he would not constitute the Board of NSITF within the one week ultimatum given by Oshiuomhole. He expressed disbelief that such a letter could emanate from the APC chairman.

He said: “Our National Chairman, I am in receipt of a letter referenced APC/NHDQ/ GEN-S/28/018/003 dated July 11, 2018, which was sent from your office and received by me on July 12, 2018. Ordinarily, I would not believe the letter was from you except for the barrage of media statements that came before I saw the letter. I read the contents of this letter with both amazement and utter disbelief.

“Three agencies have been reconstituted and members were inaugurated on March 8, 2018, in conformity with a presidential directive. All the three boards are currently operational. The only agency left out was the Nigeria Social Insurance Trust Fund (NSITF), which, before the directive, had been enmeshed in major issues of corruption, involving about N48 billion, comprising Federal Government and employers’ contributions to the Employees’ Compensation Fund, plus some non-remitted PAYE taxes, which were carted away through well perfected sleaze operation. This resulted in the agency coming under the EFCC’s investigation/prosecution of members of the former board and some of her serving officials.

“An Administrative and Financial Panel of Enquiry was instituted with a presidential approval as a follow – up to the criminal investigations. This was followed by a House of Representatives Committee on Labour and Employment probe in March 2018, which is still ongoing.

“Comrade National Chairman, you are aware of this situation and you had broached this issue with me during your campaign period, when I visited your campaign office. Due to the fact that a lot of the information available to me as a minister are classified, I had told you that I will brief you later and, at our last meeting, during a function on Saturday, July 7, 2018, I had sought for an appointment for the next day, so I could brief you on the situation.”

“I’m not oblivious of the fact that you are a very interested party in the matter because having served as chairman of the NSITF board before the last board, and as a former Nigeria Labour Congress (NLC) president, you would be interested in the tripartite colouration of the board being maintained. More so, as labour still remains your base constituency. Mr. Chairman, a lot of the classified information from the EFCC, the Auditor-General of the Federation’s “spot check” report for an organisation with an account that has not been audited for five years – 2013 – 2017, are not within your purview. In view of all these damaging reports, I had a presidential permission not to inaugurate this particular board at the time we did the others.”