Another Okorocha in-law declares interest to run for Imo governor


As the race to succeed Imo State Governor, Rochas Okorocha gathers momentum, his brother-in-law, Mr. Chuks Ololo, has declared interest to run in the 2019 governorship election in the State. 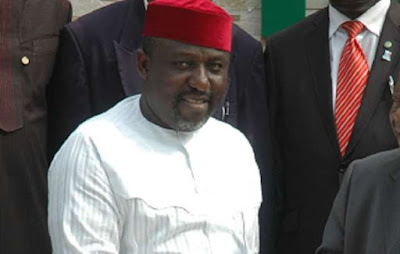 Ololo, a board member of the Federal Institute of Industrial Research (FIIRO), Oshodi, is married to Ogechi, Okorocha’s younger sister, who is the Commissioner for Happiness and Purpose Fulfillment.

The development means Okorocha now has two in-laws seeking to take over from him.

Uche Nwosu, the incumbent Chief of Staff who is married to Okorocha’s first daughter is also in the contest.

Okorocha had reportedly asked Ololo to forget his ambition, insisting he had already endorsed Nwosu.

But Daily Trust, however, quoted Ololo, in Owerri, as saying he was in the race, and that his mission to govern Imo State was divine.

Uche Nwosu recently rubbished claims that he had suspended his governorship aspiration, following pressures by the opposition.

In a statement, the former Commissioner of Lands in the state noted that contrary to insinuations, his ambition has been strengthened by the activities of the opposition.

He warned that cheap blackmail and propaganda can’t stop his ambition.