9:41 AM Mystique 0 Latest News in Nigeria 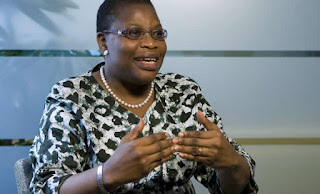 A former Minister of Education, Dr Oby Ezekwesili, on Tuesday, embarked on a lone protest to the Presidential Villa, Abuja over the killings of over 100 people in Barkin-Ladi and Riyom in Plateau State by suspected Fulani herdsmen.


Supported by a few members of the #BringBackOurGirls coalition, Ezekwesili walked from the Eagle Square to the first gate of the Presidential Villa, Abuja, where she was stopped by armed security operatives.

Over 20 policemen, 15 soldiers and a number of Department of State Services’ operatives in three vehicles blocked the access road to Aso Villa and prevented the lone protester from taking her message to President Muhammadu Buhari.

The security operatives also attempted to confiscate handsets and television cameras for recording the lone protester.

The Channels Television crew had to flee the spot to avoid the wrath of the operatives who were very hostile and aggressive.

Following the intervention of a senior DSS operative, Ezekwesili was allowed to read her address at the Villa gate as visitors who were driving into the complex gawked at her.

The operatives also grudgingly permitted her to tie her banner to the gate.

She warned the security personnel against removing the banner, noting that she wanted the President to read the inscriptions, which read, “#End the killings; #End the blood flow; Help, Where are the killers?”

In her 18-point demand, the BBOG co-coordinator decried the alleged ambivalence of the President to the killings, saying that he had failed to show empathy for the victims of the bloodshed.

She asked the President to address the killings across the country and to “stop normalising endless blood flow of our innocent children now; it is an aberration.”

Ezekwesili also admonished the government to “end the incompetence of the security agencies and to stop rewarding their leadership,” noting that about 1,196 Nigerians had died in the past five and a half months.

The former minister cautioned Buhari against further making statements endorsing the killers’ justification of their crime as a retaliatory act for stolen cows.

“Mr President, your bias in handling the killings and abductions of a certain segment of Nigerians is all too obvious and unbecoming of a leader of a diverse nation like Nigeria; all Nigerian lives matter,” the lone protester added.