nPDP crisis, fallout of congresses — five issues APC ought to have resolved before convention


The elective national convention of the All Progressives Congress (APC) is hours away. The exercise comes less than eight months to the 2019 elections. Despite attempts to create the impression that all is well, the party is going into the convention more divided than it has ever been. 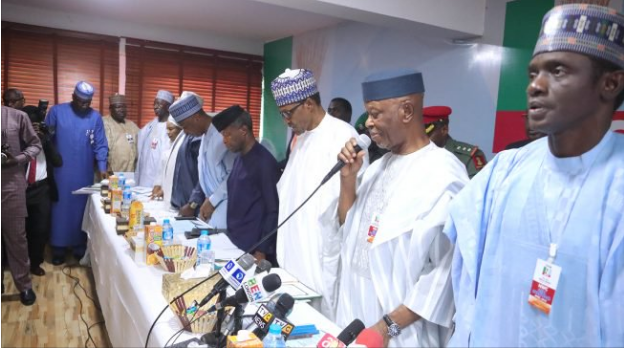 Enmeshed with tales of factions, fears of defection and bottled-up grievances. Whether the party will remain in office beyond May 29, 2019, will largely depend on the success or otherwise of the convention, and its ability to bring its house under one roof.

We take a look at the challenges the ruling party ought to have resolved ahead of the convention.

PARALLEL/VIOLENT CONGRESSES
The very foundation of the convention began to fall apart weeks ago when the party’s efforts to conduct peaceful congresses – a litmus test for it ahead of the elections – hit brick wall. From cases of parallel congresses to incidents of violence and boycott, the congresses were marred by infractions. In the end, over seven states produced separate executives while John Odigie-Oyegun, its outgoing national chairman, never featured in any of the congresses in Edo, his home state.

There is the likelihood that states where parallel executives emerged will send separate delegates to the national convention, though the APC has said it will not recognise any parallel congress at the exercise. What will happen if some of the executives – coming from parallel congresses – are turned back? Will they get a sense of belonging or feel left out in the party’s affairs? Can’t they form a force and pose threat to the ruling party even before the coming elections. APC ought to have take critical steps to resolve the fallout of its congresses.

nPDP  CRISIS
Another big challenge that is facing the party at the moment is the grievances of the new Peoples Democratic Party (nPDP) faction. The bloc, which houses some top members of the party including Senate President Bukola Saraki and Yakubu Dogara, speaker of the house of representatives, had pulled out of the PDP to team up with the APC for the 2015 elections.

In May, the group wrote to Oyegun, listing several grievances and demanding an emergency meeting with President Muhammadu Buhari. They complained that despite the role they played in bringing APC to power in 2015, they had been neglected in the scheme of things.

There was hope when Vice-President Yemi Osinbajo hosted nPDP members at Aso Rock. But things started looking bad when they pulled out of a subsequent meeting in protest of the withdrawal of security aides of Saraki and Dogara. The group had said while it was committed to “achieving reconciliation, harmony, truce and cohesion” in the APC, the presidency might have been negotiating in bad faith.

The last chance to bring those in the group into the fold ahead of the convention fell through last week when the president vowed not to meet with them. Although the group had said it will be attending the convention, who says an nAPC can’t emerge at the convention ground? Those up to date with our political history will still recollect how nPDP stage a walkout at the PDP convention five years ago.

PACIFYING NWC MEMBERS WHOSE TENURE EXTENSION WAS REVERSED
On February 27, the APC extended the tenure of its national working committee (NWC) John Odigie-Oyegun, outgoing national chairman of the party, other members of the NWC and state executives were handed another 12 months in office, effective from June 30.

The development had barely lasted a month before Buhari kicked against it, saying it is against the party’s constitution. The president had said he wanted to avoid a legal battle that could jeopardise the party’s cohesion before the 2019 general election. Prior to that, other party leaders including Bola Tinubu, a national leader of the party, had also opposed the move.

Pundits say Buhari may have considered his chances in 2019 and seen that he needs Tinubu more than he needs Odigie-Oyegun and so, had to “trade off the outgoing national chairman in order to court Tinubu.”

While the reversal of the tenure extension had saved the party what would have been a much invited division, the party should have made more efforts to pacify those affected by that decision. Although many of the state executives and NWC members have pledged loyalty to the APC, it is clear that a lot is running on their minds.

STATES ON WARRING PATHS
Prior to the emergence of the various factions during the APC congresses, the ruling party was divided in some states where the battle for supremacy has been on for long. Most prominent among these states are Kaduna, Kano, Kwara, Rivers, Kogi, Imo, Oyo and Kogi.

In Kaduna, for instance, there are currently two factions of the party, the one loyal to Nasir el-Rufai, the governor of the state; and that of Senators Suleiman Hunkuyi and Shehu Sani.

Things got messier in February when the secretariat of the second camp was demolished reportedly on the orders of the state governor, and also when a loan request from the state government was kicked against by the senators in what the state said is to frustrate its works. Sani’s grievance is not only with the state chapter of the party, however, as the senator had on several occasions faulted the party’s operations and accused it of corruption and lack of transparency.

The APC in Kogi is also like a house turned against itself as Dino Melaye, senator representing Kogi west; and Yahaya Bello, the governor, have remained political enemies for as long as could be remembered. Melaye had accused the governor of orchestrating a process to recall him from the senate; an allegation the governor denied.

Kano is not different where Rabiu Kwankwaso, former governor of the state, and Abdullahi Ganduje, the incumbent, have been at warring paths.

The story is same in other states where the lack of united front, if not resolved at the convention, could affect the party’s chances of having a good outing at the 2019 elections.

TINUBU’S ‘INCONCLUSIVE ASSIGNMENT’
The Tinubu reconciliatory committee was set up to soothe fray nerves and reconcile warring parties within the APC but ironically, the former Lagos governor himself needed to be reconciled with the Odigie-Oyegun-led NWC that had allegedly sidelined him in the affairs of the party and whose tenure extension he had kicked against.

He later accused Odigie-Oyegun of frustrating his peace efforts. Odigie-Oyegun denied the allegation and told Tinubu he should be rest assured of his support towards ensuring the success of the reconciliation task but that could have happened in the dream. The rift between the two is in the open.

The party should have done more to make the reconciliation succeed. Of a truth, it would have been extremely difficult to achieve peace in all the states but healing wounds ahead of the convention would have worked in its interest. What we have at the moment is like sitting on a keg of gunpowder.

LIKE PDP, LIKE APC?
At the PDP convention in 2013, grievances, agitations and protest had snowballed into breakaway faction and eventually saw a mass defection hit the hitherto invincible party, costing it the 2015 presidential election.

What happens this time with the APC? Will there be emergence of another marriage of convenience by breakaway factions and other parties – as was with the APC merger prior to the last general elections, or will the party emerge from the convention more united and determined to face the elections? Whatever the case turns out to be, efforts should have been made to pursue peace within.