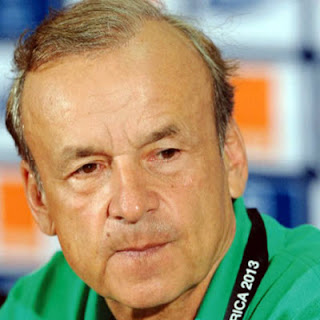 Gernot Rohr, Super Eagles Technical Adviser, said his team lost their last Group match at the World Cup match against Argentina to an experienced side.


Rohr made this known to Journalists at a post match news conference after the Super Eagles lost 1-2 to Argentina on Tuesday.

“It was a big disappointment.  Even though my players played their best, they lost
to the opponents due to inexperience of my players.

”My team is a very young side compared to the Argentines, who play in the big leagues all over the world. You can talk of the experience of Lionel Messi.

”But my team is a very wonderful one; disciplined, young and very interesting to work with.

”They will be ready in the next World Cup when most of them would have matured for big time football like the World Cup,” he said.

Messi opened scores in the 14th minute of the first half, while Victor Moses leveled up via a penalty in the 51st minute of the encounter.

However, Marcos Rojo rapped up the game for the Argentines to move forward into the second round of the competition.

Rohr, who promised to continue with the team in spite of the ouster, however, promised that the team would be better during the AFCON games.

”In four years the team will be very strong and I would love to stay with them because they are disciplined and fantastic,” he said.

However, the coach refused to be drawn into the controversy of why the referee from Turkey, Cuneyt Cakir, failed to award a second penalty to the Super Eagles, saying he had the final say.

With the loss, Nigeria is out of the competition, while Argentina moves to the next round with four points from three matches having lost one, drawn one and won one with Nigeria losing two (against Croatia and Argentina) and winning one of its three matches (against Iceland).

Before their last Group D match with the Super Eagles, Argentina looked like it had no chance of moving on from the group stage of the 2018 FIFA World Cup having drawn its first match with Iceland and lost 0 – 3 to Croatia in its second.