After six months in the 2018 fiscal year, President Muhammadu Buhari finally signed the 2018 budget of consolidation into law, thanks to a seven-month delay by the national assembly. 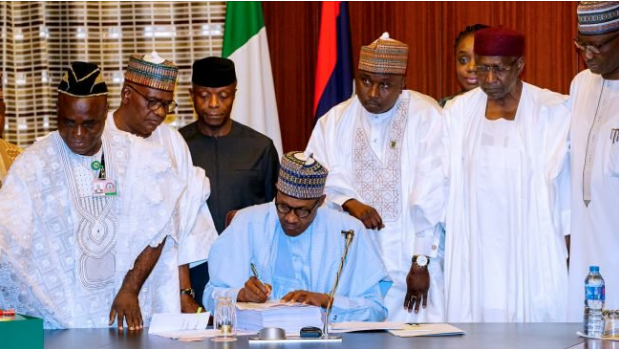 The president revealed that the national assembly had inserted 6,403 new projects into arguably the last budget before the 2019 elections, while cutting down on some crucial projects.

We have reviewed the key content of the signed budget and presents seven troubling facts about the budget:

In clearer terms, the amount to be spent on debt is almost double the government’s statutory non-oil revenue — VAT, CIT, customs, and federation account levies — which stands at N1.249 trillion.

The 2018 budget however has bigger potentials in raising that number to over N3 trillion by the end of its implementation period — if similar figures come from the second quarter of the year.

According to the budget breakdown seen by TheCable, the federal government will borrow fresh N1.6 trillion to meet the budget deficit for 2018.

33 PERCENT OF THE BUDGET TO BE FUNDED BY OIL
In 2016, with President Muhammadu Buhari’s first budget, which was tagged the budget of change, the government said it was moving away from oil dependence.

The government expected only N820 billion of the budget to be funded oil, focusing more on non-oil revenues (N1.45 trillion) and independent revenues (N1.51 trillion).

By 2018, Nigeria had recorded some increase in oil prices, and returned to business as usual; about a third of the budget is to be funded by oil.

N520 BILLION JUMP IN NON-DEBT RECURRENT EXPENDITURE
The budgeting goal is to stem recurrent expenditure, while increasing capital expenditure — but for 2018, the reverse is the case.

While it must be acknowledge that there has been some recruitment in the Nigerian Police Force, the Department of State Services (DSS) and some other federal agencies, a N520 billion increase in recurrent expenditure is still too high.

‘A FALL IN CAPITAL EXPENDITURE’
There has been an increase in the amount of money to be spent on capital expenditure, from N2.36 trillion to N2.87 trillion.

This is some bitter-sweet news. Though the raw cash seem to have increased, the percentage of the capex in the budget has reduced, relative to 2017.

OIL OUTPUT BENCHMARK
In 2017, Nigeria set its oil output benchmark at 2.2 million barrels per day, but the actual budget performance shows only 1.86 million barrels was pumped per day.

However, the government has raised expected production to 2.3 million barrels per day — over 400,000 barrels short of the actual production levels.

This means the disparity from actual oil income, and the expected income will run over N500 billion and consequently hurt the implementation of 2018 budget.

DROP IN NON-OIL REVENUE
One of the major selling points of the Muhammadu Buhari government has been the diversification narrative — increase in taxes, increase in mining revenue, and a surge in non-oil revenues.

The 2017 budget however shows that the government expects a drop in non-oil revenue; VAT, CIT, customs, and federation account levies.