A+ A-
Print Email
Parents, especially mothers are easily heartbroken when separated from their children. Such is the case of the mother of the celebrated singers, Mamuzee Twins, who died recently. 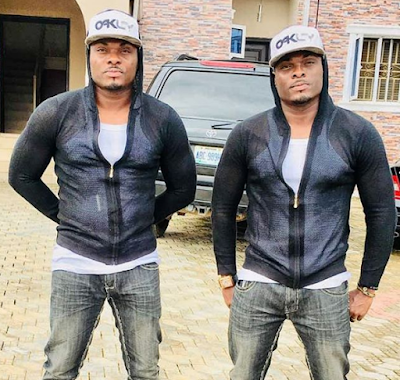 Veteran dancehall singer, Daddy Showkey, had earlier during the week called out singing twins Mamuzee on social media explaining how the twins abandoned their mother for 17-years until her death. Showkey revealed that even when their mother went into coma he sent her ailing photos to them to see that she needs them but they refused to come to see her only for them to share her photo mourning her passage after she had died.

Well, one of the siblings of the twins, Augusta, has revealed that they are the cause of their mother’s untimely death. She spoke during the burial of their mother that she had 10 children and that it was only the twins that abandoned her.

Romans 6: 5. For if we have been planted together in the likeness of his death, we shall be also in the likeness of his resurrection: It please's God to call my Mom, yesterday back unto His glory! Adieu Mommy......Rest in perfect peace in the bossom of Lord
A post shared by MamuZEE 2 (@mamuzee2) on Jun 20, 2018 at 12:15am PDT

She narrated further that after many years that they refused to see their mum she went to their house only for them to run into their rooms, came out with their bibles and stood on it telling their mother that she will die if she had come to them with any evil intention.

Daddy Showkey had earlier revealed that the twins abandoned their mother after their pastor told them she was a witch.

Augusta who is the younger sister of the Mamuzee Twins claimed that they should indeed be blamed for their mother’s untimely death.

She said: “About six years ago, our mother was so unhappy with the fact that she had not seen her sons for a very long time, so she took two pastors and went to their house and according to the pastors that went with her, immediately they saw our mother, they went inside the room and came out with a bible.

“Then they stood on the Bible and placed a curse on our mother. They said that if she had come with any evil intention, she would die in a week. The pastors said that our mother could not cry; she just began to sweat. When they got back to my house, my mother could not say a word. That was the final straw that broke the camel’s back because after that day, we began to visit several hospitals over her health. Although I never tried to reach out to Mamuzee because I was very upset with them, some of my other siblings reached out to them but couldn’t get through them. About two months ago, I noticed that our mother could neither eat nor drink anything.”

Their sister further revealed that their mother never overcame the shock of the kind of treatment her children gave her. It was since then that her health started deteriorating.

“I got a nurse to treat her and we were told that she had malaria. When her health was getting worse, I rushed her to Igando General Hospital and to my surprise, I got Daddy Showkey’s call. He was our childhood friend even though he is older than Tony and Andrew. We all loved him. When I picked his call, the next question he asked was about our mother. By that time our mother was in a coma, Daddy Showkey asked me to do a video call when I was with my mother so that he could see for himself and I did as he instructed."

Like Daddy Showkey claimed in his ealier call to the twins after the death of their mother, Augusta said she took their mother's picture as advised by her father-in-law after she went into and sent to all her children, everyone else except the twins came to see her.

“My father-in-law advised me to take a picture of my mother in her comatose state and send it to all my siblings via Whatsapp. Every one of them responded, even the two that are abroad except Mamuzee. It was obvious that they saw it but they did not respond. All my mother’s children living in Nigeria rushed to the hospital to see her except Tony and Andrew and the two that are abroad kept calling constantly.”

Augusta claimed that before her death, when she opened her bible, the only prayer point she had in it was for her sons to come back to her.

“While she was alive and ill, she was always calling Mamuzee. There was a time I had to go to Bayelsa to get some of her things. There was a box where she kept her documents, I stumbled on her Bible and prayer books and the only thing she asked from God was for her twins to return to her. Our mother died of heartbreak and depression.”

“The amazing thing is that our mother never laid a curse on them. Our mother gave birth to ten children and we all have children of our own. If our mother was a witch, she could have killed us or her grandchildren but we are all healthy and doing very fine in life. We do not know where the story that they do not have children emanated from because they both have kids.”

Augusta added further that: “Tony and Andrew killed our mother. It is Mary and Martha that are doing this to them. All is not well, I saw what they posted on Instagram about our mother’s death. They do not even have her recent picture except the one I sent when our mother was in a coma. The picture that they are posting online is the one my mother took after we just returned from Ghana in 1985. We started our lives in Ghana before our mother brought us back to Nigeria and singlehandedly raised us. Now they are calling this same woman a witch.”

“Tony and Andrew cannot be forgiven. I did not comment because I do not want to have anything to do with them. Tony and Andrew killed my mother and they would not find peace. My mother’s spirit would take vengeance. I give God the glory that my mother held her peace till the very end. My mother prayed for ten years to have twins and when she finally had Tony and Andrew, it was as if they were her only children. My siblings were angry that our mother really loved them but now that we are grown up, we understand. They would not go unpunished.