As It Happened: Nigeria 2-0 Iceland 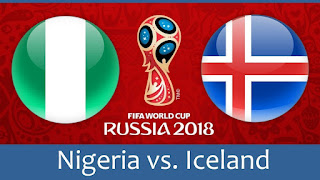 Good evening and welcome to the live commentary of the World Cup Group D match between Nigeria and Iceland.

Nigeria have won just one of their last 13 games at the World Cup (W1 D3 L9), losing their last three, with that solitary victory coming against Bosnia and Herzegovina in 2014.

20 mins til KO: There has only been one previous meeting between Nigeria and Iceland, with the latter winning 3-0 in a friendly in August 1981.


The full-time whistle goes in Volgograd and Nigeria have registered a deserved 2-0 win over Iceland. The Super Eagles were second best during the opening 45 minutes but Musa changed the game in the second half with two brilliantly-taken goals. A win over Argentina will be enough to qualify from Group D. Thanks for joining our lie coverage of the match!

90+5 min This doesn't look too good. Mikel has picked up an injury to his arm and looks in some distress. He will carry on but this could be an issue going forward.

90+3 min Iceland have been boosted with the amount of time added-on, but Nigeria still look comfortable. A draw with Argentina is likely to be enough to earn a place in the last 16.

90+1 min There will be six minutes of added-on time.

90 min SUBSTITUTION! Nigeria decide to waste a bit of time with the introduction of Iwobi for Etebo.

89 min This match feels pretty much over now. Nigeria have managed this game brilliantly. Iceland look out of ideas.

87 min SUBSTITUTION! Iceland make another change with Skulason taking the place of Gunnarsson.

85 min SUBSTITUTION! Off comes Iheanacho - after shooting wide from distance - with Ighalo being introduced.

83 min MISS! Oh my word. Sigurdsson sends his penalty over the top of the crossbar! It's a terrible effort.

81 min PENALTY TO ICELAND! Ebuchi trips Finnbogason inside the penalty area and it's a definite penalty. The referee missed it in open play but VAR comes to the rescue!

79 min Nigeria really look a class act now. They are showing the confidence to spray the ball around with pace, producing flicks as and when they want. This could be a long 11 minutes for Iceland.

77 min To Iceland's credit, they are still trying to push forward but they are second best all over the pitch. They are going to have to beat Croatia on matchday three to have a chance to remain in this competition.

75 min Game over and it's another stunner from Musa! The attacker surges clear of Arnason, rounds Halldorsson and takes his time before finding the bottom corner with a player on the line. What an outstanding goal. This is the perfect result for Argentina. They are not out of this competition just yet.

74 min WOODWORK! Nigeria now hit the woodwork! The ball sits up for Musa on the edge of the area and the Leicester man cannons a shot off the crossbar! However...

73 min CHANCE! Nearly a second for Nigeria. Balogun - who will represent Brighton & Hove Albion next season - meets a corner at the near post but sends a glancing header over the crossbar.

71 min SUBSTITUTION! It's one former Wolves man for another. Bodvarsson makes way with Bjorn Bergmann Sigurdarson coming on his place.

70 min This match really has been a game of two halves. You wouldn't back against another goal being scored during the final 20 minutes of this contest.

68 min SHOT! Gislason receives the ball around 40 yards from goal and his only thought is to turn and run towards goal. The Iceland midfielder gets an effort away but it is always going over the crossbar.

66 min SHOT! Moses launch another attack down the right but Moses didn't need to try a shot from the side of the penalty area. His effort goes well wide of the near post. Waste of possession.

65 min SUBSTITUTION! Iceland's first change sees Ragnar Sigurdsson withdrawn - presumably because of the head injury that he sustained at the start of the second half. Ingason is on his place.

63 min Iceland win a free kick in a threatening area but Sigurdsson opts to cross instead of shoot and Uzoho makes the easy claim.

61 min It can't be long before the first Iceland change. Nigeria's superior fitness is starting to tell and they are relishing the chance of playing on the break. Less than half-an-hour to go.

59 min Better from Iceland, however. They win a corner out on the left and the ball goes free by the penalty spot, but Iceland cannot react fast enough and Nigeria clear.

57 min SHOT! It's all Nigeria. Ndidi tries his luck from distance - he is at least 30 yards out - but his swerving strike is tipped over the crossbar by Halldorsson.

55 min In the build-up to this game, we pointed out that Iceland are not a second-half team. They have not made a positive contribution after half time for at least seven matches. This is a big test on their fitness.

53 min We are still to get back underway. Sigurdsson looks ok to continue for now but at one stage, a replacement had been lined up.

51 min We are going to have a break in play while Ragnar Sigurdsson receives treatment on a head injury. Iceland need the time to regroup. They look shell-shocked here

49 min Unbelievable! Less sarcasm this time. Nigeria break forward down the right and the ball is eventually delivered into the box, where Musa brings the ball down and drills a half-volley into the roof of the net from 12 yards. Great goal!

48 min The signs are good that we are going to get a much more entertaining half. Iceland have already responded positively without getting an effort on goal.

46 min SHOT! Unbelievable scenes. It has taken Nigeria all of 20 seconds to get a shot off in this half! Etebo surged forward before seeing a low shot from distance saved by Halldorsson.

46 min KICKOFF! We are back underway.

The half-time whistle goes in Volgograd and we remain goalless. It's been the most uneventful 45 minutes of this World Cup but Iceland did suggest just before the break that they can find a way through. Nigeria have had two thirds of the ball but are yet to register a shot of any note.

45+2 min CHANCE! Where has this been all half? Iceland win a corner and Bodvarsson meets it at the back post, but the forward's header goes just wide of the far post.

45+1 min There will be two minutes of added-on time.

45 min CHANCE! How have Iceland not score?! Sigurdsson's set piece is terrific and Finnbogason meets it around 10 yards out but the forward fails to make a proper connection and the ball goes wide of the far post.

44 min BOOKING! Idowu goes into the book for fouling Bodvarsson on the touchline. A late chance here for Iceland.

43 min A corner for Nigeria. Maybe this is the moment?! No - no, it's not. Iheanacho's inswinger goes over everyone and out for a goal kick.

41 min Almost for Iceland. Bjarnason has been his side's biggest threat and he reaches the byline after nutmegging a defender. However, the Villa man's low cross avoids everyone and Nigeria survive.

39 min There are plenty of bottles on the side of the pitch where players have been forced to take on extra water. Mikel is the latest player to do so. We still await Nigeria's first shot.

37 min Less than 10 minutes to go in this first half and I have to admit, I am looking forward to the half-time refreshments as much as the players will be. It really has been that dull but let's be positive - it can only get better.

35 min SHOT! It's ambitious but you cannot blame Bjarnason for taking this shot on. The Aston Villa man makes a solid connection with his volley on the turn but it is always going over.

33 min Still nothing else to report. Both teams look lethargic aside from the odd flurry forward. Both managers will surely look to change things at the break. This is the game which these two nations will regard as their best chance of three points.

31 min Nigeria have had 67% of possession but in 31 minutes, they still haven't attempted a shot. That tells you every that you need to know about this match! A free kick for the African nation from a deep position has just gone to waste.

29 min For what is it worth, both teams are passing the ball around nicely but that is probably because they are not being troubled. This is a World Cup group fixture but it feels like a friendly.

27 min It is difficult to see where the first goal is going to come from. There's just not enough sustained pressure coming from either team. In all fairness, the conditions may be playing a part.

25 min Better from the Super Eagles who make inroads down the left through Musa. Nigeria eventually get a cross into the area but Iceland are too big and too strong and comfortably deal with the danger.

23 min For all of Nigeria's possession in this game, they are yet to register a shot on goal. Iheanacho is a willing worker but he isn't seeing enough of the ball and when he does, it's away from the penalty area.

21 min Back come Iceland with the pressure starting with a long throw from Gunnarsson. The Cardiff City man eventually crosses from the right, forcing Uzoho to tip the ball away away, before Bjarnason sees a volley deflected wide.

19 min Moses attempts to inject some life into Nigeria's attack but despite some intelligent play on the right, Iheanacho fails to control his pass on the edge of the area and the opportunity is lost.

17 min Nigeria have just had a long throw-in of their own but nothing comes from it. It's all gone a bit quiet since Iceland's two opportunities in the opening five minutes.

15 min Finally, Iceland have some more joy in the Nigeria half with a long throw causing problems in the final third. Nigeria survive, however, but watch as Iceland ready another attack.

13 min When Iceland do not have the ball - which has been for the majority of the past five minutes - Bodvarsson and Finnbogason are well inside their own half. The Iceland fans don't care - here comes the first thunder clap of the contest.

11 min Still much of the same with Nigeria keeping Iceland on the back foot. Iceland appear perfectly content to sit deep and wait for a mistake out of the Super Eagles rather than looking to press.

9 min Iceland are giving Nigeria more of a chance to get their foot on the ball. If everything, it appears as though they are looking to manage their fitness levels. I don't suppose it is 32C very often in Scandinavia.

7 min Nigeria are starting to settle down now and have earned a corner but they are very much second best during these early stages. This is already progressing into an entertaining battle.

5 min SHOT! Iceland have started really brightly here. Another chance arrives at the feet of Sigurdsson but the Everton man tries to be too precise from 20 yards and Uzoho makes the easy save.

3 min SHOT!: Sigurdsson's curling effort is heading towards the top corner but it lacks the power to really trouble Uzoho, who tips the ball over the crossbar.

2 min It takes Iceland just over a minute to earn a free kick around 25 yards from goal and in a central position. Sigurdsson will take...

1 min KICKOFF! Nigeria get us underway!