It’s impossible to have ministers from every tribe, Buhari tells Urhobo leaders


President Muhammadu Buhari on Monday told members of Urhobo Progress Union that each tribal group in the country cannot have a minister at every point in time. 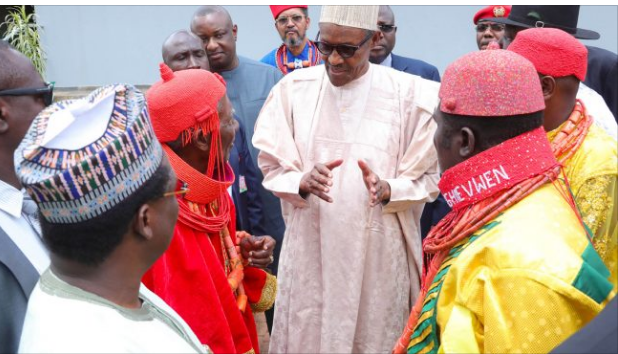 President Buhari told the traditional rulers and opinion leaders drawn from the union that “it is not possible to make each tribal group (a minister) because I suspect they are around 250”.

Speaking during a meeting with the Urhobo leaders at Aso Rock, he said: “Two hundred and fifty ministers will be too cumbersome to handle, so it is limited by the constitution. So the only thing we can do is to pick one person per state.”

Buhari called on leaders in the Niger Delta to continue to cooperate and support the federal government in its efforts to transform the nation to greater height.

“I appeal to you to keep restraining your subjects to please think more of being Nigerians than any particular part of Nigeria,” he said.

“This is necessary so that the resources that God blessed us with can be fully exploited, utilized for the benefits of the whole country.

“Unfortunately for me, I have gone through all the happenings in the country including the civil war, like you have mentioned I was petroleum minister for three or four years and so I have some experience and have a stake in the country.”

President Buhari urged the leaders to talk to militants to please give peace a chance and stop sabotaging installations because “like I said if we pollute the waters it will affect more of your people including those who depend on fishing”.

“You don’t need money from Central Bank, what you need is secured coastlines that will enable the people earn decent living through fishing.”

He pledged to look into reported cases of illegal sale of land donated to the Nigeria army by communities across the country.

President Buhari said the alleged sale of the land meant for the military authorities across the country would not be tolerated, saying that anyone caught or implicated in the deal would be prosecuted accordingly.

He said: “I have taken note of the representation that the land the community gave to the military is being sold. You are not the first set of people to make this kind of representation, other parts of the country made similar representation.

“So, by this representation I’m constrained to call on the relevant ministries to check the Ministries of Defence and Internal Affairs to find out those responsible for abusing the generosity you extended to the military will be brought to book. I assure you of that.”

On calls for restructuring the country, the president frowned at the way and manner some individuals or groups were carrying on with such calls, saying that many were parochial rather than national interest.

According to him, some views being expressed for restructuring the country are uncoordinated and that such clamours may not also be backed constitutionally.

“You mentioned something which is being topical these days, the question of restructuring Nigeria, and every person or every group asking for restructuring they have got their own agenda,” he said.

“I hope it can be accommodated by the constitution we are currently operating.”