I scored against Argentina before, and I will do it again - Ahmed Musa vows 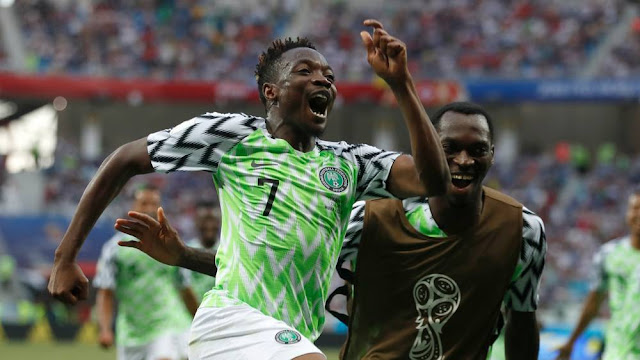 Ahmed Musa struck two stunning goals to sink Iceland 2-0 on Friday and then promised to do the same to Lionel Messi’s Argentina in Tuesday’s Group D showdown.

The Leicester City striker, currently on loan at CSKA Moscow, became the first Nigerian to score at two World Cups as the Super Eagles secured a crucial win over Iceland, who missed a penalty.

He scored both goals in Nigeria’s group stage 3-2 defeat to Argentina in Porto Alegre, Brazil, four years ago and is relishing the chance to do it again.

But this time he hopes it will knock out the South Americans.

“I think scoring against Argentina isn’t that difficult for me,” he smiled after his man-of-the-match performance in Volgograd. “We know the importance of the game. It’s do or die.”

The African side will secure a spot in the knockout stage alongside Croatia if they beat Argentina.

A draw would be enough to eliminate the Argentines but would leave Nigeria’s fate resting on the outcome of Iceland’s game against Croatia which kicks off at the same time.

Musa also scored twice for Leicester in a 4-2 pre-season friendly defeat against Messi-inspired Barcelona two years ago and said he always scores when up against the Argentine superstar.

“I can remember four years ago when Messi played in Brazil I scored two goals,” he recalled.

“And when I transferred to Leicester I played against Barcelona and he’s on the pitch and I scored another two goals.

“So I think next game anything can happen — possibly I’m going to score another two goals,” he laughed.