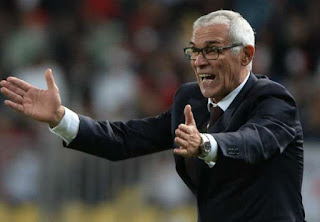 Egypt and its manager, Hector Cuper have parted ways after a poor performance at the 2018 World Cup.


The former Inter Milan Boss, Cuper was appointed in March 2015 and led Egypt to the final of the 2017 AFCON which they lost to Cameroon.

The Pharaohs, appearing in the World Cup for the first time in 28 years, finished bottom of Group A without a single point from three matches.

A late 1-0 defeat to Uruguay, a 3-1 loss to Russia and another 2-1 loss to Saudi Arabia ended their World Cup dreams.

Cuper would have been out of contract after the tournament, but had been in negotiations with the Egypt Football Association, EFA, before the tournament started.

However, the EFA confirmed in a statement on Tuesday: “We held a meeting after returning from Russia and the entire board decided to say thank you to Cuper and his technical staff.

“We appreciate the work from the coach, from reaching the Africa Cup of Nations after three years of absence and taking Egypt to the World Cup after 28 years of absence.”