The All Progressives Congress (APC) governorship candidate for the July14 election in Ekiti State, Dr Kayode Fayemi, on Tuesday relived how he and other bigwigs of the party escaped being killed during the gunshot that occurred on Friday at a rally organized in his honour. 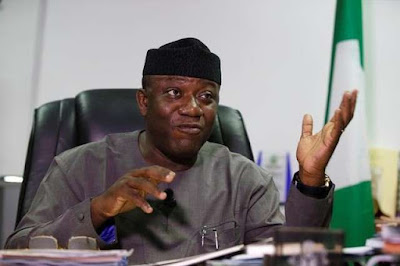 The former Minister revealed that he alongside Ondo State Governor, Barr. Olurotimi Akeredolu, ex-minister of Works, Prince Dayo Adeyeye and Hon. Opeyemi Bamidele would have been killed, but for God’s intervention.

Fayemi vowed that the July 14 election would be the end of Governor Ayodele Fayose’s political reign in Ekiti state, expressing confidence that the party will work hard across the 177 wards to ensure that PDP is uprooted from the state.

He described Adeyeye’s defection from the Peoples Democratic Party (PDP) to APC as a big boost to the party, saying his parting ways with Fayose would help the reclamation struggle against the present governor.

At the rally, a policeman had suddenly fired a gunshot, which hit Bamidele and five others, who are now receiving treatments in the hospital.

Fayemi spoke in Ado Ekiti on Tuesday when Adeyeye formally joined the party with members of Prince Adedayo Adeyeye Movement (PAAM) across the 2,195 polling units in the state.

The APC candidate said, “We thank God that we are alive. What do you think would have happened if Governor Akeredolu, Adeyeye, Bamidele and I had died? It was possible for the bullets to have hit and killed all of us, but we thank God.

“We pray that God just prevented it. The unprecedented crowd we saw at Ikere Ekiti and how people were rushing out shows that Ekiti people were determined to fight a liberation war against Governor Fayose,” he said.

He assured PAAM members that Adeyeye remains a respectable leader of the party, who can’t be shortchanged in the political equation due to his political worth, if APC eventually wins.

Fayemi denied the allegation by Governor Fayose that he was coming to sack the teachers, saying his coming back will only add value to the lives of the civil servants.

“Let me assure you that we are all equal in APC, there is nothing called defectors. We are going to reward people on how they deliver their wards and units,” he said.

Speaking on Governor Fayose’s alleged degrading of Ekiti’s virtues of integrity and honour, Fayemi said: “Fayose is a coward, he only boasts in the open but a coward in the real sense of it. All he wants is to pull all Ekiti citizens down for him to be on top but his game is up”.

In his remarks, Adeyeye regretted that Fayose allegedly tricked him and others in 2014 that he was a changed person, only for him to get into government and turn a ‘despot’.

The ex-minister promised to deliver bulk votes for Fayemi in the election, saying, “the unprecedented winning of 2014 against Fayemi was made possible because of people like us.

“We knew Fayose’s tricks and his antics, he is a selfish and cunning person. That is why we are joining hands with like-minds like Fayemi to rescue Ekiti from him, because he has pauperized everybody.

“We decided to join APC because the party nominated a good person like Dr Fayemi as its candidate. Dr Fayemi is highly educated and exposed, he is not crude like our brother, we are going to deliver our votes for him.

“Governor Fayose said teachers and civil servants will vote for him even if he owes eight month salaries. He even claimed Fayemi is coming to sack teachers, these were all lies, that is his stock in trade.

“We gave him benefit of the doubt in 2014, thinking he would be a good person, but he turned out to be worse than before.

“As we speak today, Fayose is alone. He has no credible leader behind him. He is empty and naked and this coming election will expose his weakness.

“With the way he has carried himself, it was obvious that he came to loot Ekiti. But we thank God that we have a reliable opposition in Fayemi.

“This work is our own, we must do it with all our hearts. I know and I am confident that Fayemi won’t disappoint us, because he has the love of Ekiti at heart.

“We are talking to those who are aggrieved in APC to have a rethink, because working with Fayose would only make Ekiti worse. By all standards, you can’t compare Fayemi with Fayose”, he said.