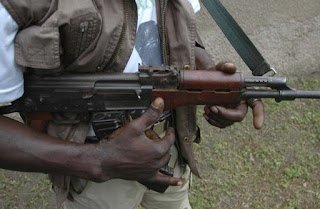 The traditional ruler of Ogbozine Akpugo, in Nkanu West Local Government Area of Enugu State, Igwe Nwatu has been murdered.


Nwatu, was allegedly killed by unknown persons while returning from a court sitting at Nkanu, the local government headquarters Monday afternoon.

Police sources said that Nwatu was trailing one of his subjects who had some issues with him, with the policemen when they were waylaid by a group of people and beaten to stupor.

His attackers reportedly disarmed his police orderlies before descending on them. The Divisional Police Officer, DPO, for Nkanu West Police Station, who got wind of the attack was said to have rushed the Monarch to the Orient Hospital in the area, where Nwatu was given some first aid treatment before he was transferred to the Parklane Hospital in Enugu metropolis, where he died at 9 pm last night.

The late Nwatu was said to have been having series of problems with his subjects who had always accused him of highhandedness, as well as complained of imposition of arbitrary and illegal levies on them.

Last month, young men, women and youths from his domain, besieged the Nkanu police station, protesting over the arrest of some town union presidents based on alleged false petitions against them by Nwatu.

It took the intervention of the state Police Commissioner, Danmalam Muhammad to bring the situation under control.

Meanwhile, the police at Nkanu have recovered one the riffles snatched from one of the policemen guarding late Igwe Nwatu as at the time of the incident. Policemen and family members of late Igwe Nwatu confirmed that the late traditional ruler died from the injuries he sustained during the attack at Park Lane Hospital yesterday night.