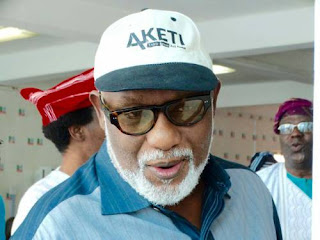 Governor Rotimi Akeredolu of Ondo state Tuesday picked holes in the allegations against him by his Ekiti counterpart, Ayo Fayose over alleged complicity in the gun attack in which four persons were injured last weekend in Ado- Ekiti, Ekiti state.


One of the governorship aspirant of the All Progressive Congress Bamidele Opeyemi and three others were shot during a rally to welcome its flag-bearer Kayode Fayemi to the state last Friday by a policeman.

Fayose through his Special Assistant on New Media and Public Communication, Lere Olayinka had accused Akeredolu of importing no fewer than 150 policemen to Ado-Ekiti last Friday to perpetrate the gun attack.

Reacting on behalf of Akeredolu, the lnformation and Orientation Commissioner Yemi Olowolabi in a statement entitled “Beyond the lies” in Akure, describe the allegations as “wicked and malicious”

Olowolabi also debunked the allegation that “Governor Akeredolu had planned to use Ondo State’s two months’ allocation to fund the electioneering of the APC governorship candidate in Ekiti State, Dr. Kayode Fayemi.

“Ordinarily, we would have ignored all the deliberate lies and falsehood, but we felt that we would not be fair to the unsuspecting larger members of the public if such lies were not debunked.

“For the information of the doubters, Governor Akeredolu, even if provoked, cannot debase his personality to a level that he will sacrifice the interests of his people for percuniary gains.

“Instead of engaging in hypocritical activities like eating at motor parks and cutting ponmo at the market square, Akeredolu is currently applying the public resources for the betterment of the lives of the people of the state.

“On Friday’s gun attack in Ekiti, we would like to refer Fayose to a statement by the Ekiti State police spokesperson, Caleb Okechukwu, which cleared the air on the issue.

“Investigation by the police had revealed that the shooter was a police officer brought from Lagos by an Ekiti politician. For this revelation, we believe that the Ekiti governor and his cohorts will now bury their heads in shame.

“We, therefore, call on the security agencies in the country to take note of the false accusation leveled against Akeredolu by Fayose and his town crier, who only a few years ago wrote a detailed report about the devious activities of his master.

“It is also important for Lere and his boss to know one very important fact, that unlike his boss, we are committed to the progress and peaceful co-existence between the state and Ekiti.

“I mean, weren’t we one before October, 1996? The seed of discord Fayose is trying to plant between the two state will not germinate no matter how much cunning he is.

“We will love to state here categorically without mincing words that Governor Akeredolu reserves every right to show support for the candidate of his party in Ekiti state, just as Governor Nysom Wike and the rest are showing support for the PDP in the state.

“There is no law that prohibits that Fayose and the PDP are making issues out of this because of the smell of defeat that has overwhelmed them.

“We want to urge Nigerians to disregard the blatant lies being spread around by Fayose and his attack dog, Lere .

“Today in Ekiti, politics has been turned into a do or die affair by Fayose. His only strategy is lying and concocted stories.

Olowolabi submitted that “We are therefore, advising him and his cronies to go and prepare for the election. Thousands of Fayose can not stop Akeredolu and other APC governors from coming to campaign in Ekiti state.