Egypt lose 3-1 to Russia, out of World Cup if Uruguay win 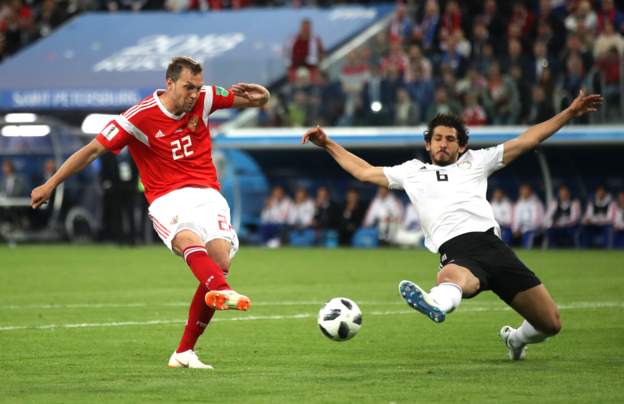 Egypt will become the first African team to crash out of the ongoing FIFA World Cup in Russia if Uruguay win or draw their Match against Saudi Arabia on Wednesday.


Egypt were thrashed by Russia 3-1 on Tuesday in their second match of the tournament.

Already, Russia have qualified for the Round of 16 after winning their two games played so far, scoring eight goals and conceding just one.

Russia opened scoring on 47 minutes through an own goal by Ahmed Fathy.

Aleksandr Golovin’s cross was punched clear by Mohamed El-Shenawy, but only as far as Roman Zobnin.

The Russian player took a terrible shot, which was definitely off target, and Ahmed Fathy turned the ball past his own keeper from about 12 yards out while trying to keep the ball away from Artem Dzyuba.

Russia made it 2-0 on 59 minutes through Denis Cheryshev. It was good play by Mario Fernandes, a former Brazil international, down the right and he squared to Villarreal winger Cheryshev, who slammed home from 12 yards out.

The host quickly added the third goal in the 62nd minute of the game through Artem Dzyuba.

Dzyuba controlled a high Ilya Kutepov ball into the box with his chest, took it past a weak Ali Gabr challenge and placed the ball in the bottom right corner of the net.

Egypt got a consolation goal when Mohamed Salah scored from the penalty spot on 73 minutes after VAL overturned referee’s earlier decision to award a free kick.

Salah stepped up and blasted a good penalty high into the back of the net – although it wasn’t overly central or into the corner.

Egypt will hope that Saudi Arabia upset Uruguay on Wednesday for them to have a mathematical chance of qualifying from the group. Uruguay just need a draw tomorrow to join Russia in the knockout stage.