1:39 AM CuteNaija 0 Latest News in Nigeria 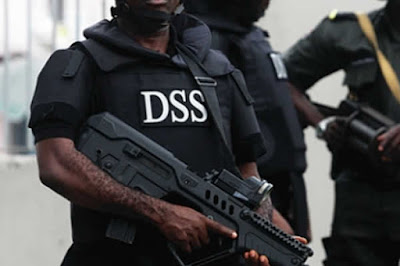 The Department of State Services said two commanders of the Islamic State in West Africa had been arrested in Kukuntu village, Gwagwalada, Abuja.


The spokesperson for the agency, Mr. Tony Opuiyo, disclosed this in a statement in Abuja on Thursday.

Opuiyo said the suspects were arrested on May 5, after operatives of the agency carried out what he described as special operations on the identified targets.

He said, “Determined to continuously thwart the budding cells of the Islamic State in West Africa and Boko Haram, the service conducted special operations on identified targets.

“This led to the successful arrest of Bashiru Adams and Rufai Sajo, commanders of the group on May 5, 2018, at Kukuntu village, Gwagwalada Area Council, FCT, Abuja.

“Relatedly, the service had on April 28, 2018, at Muda Lawal Market, Bauchi, Bauchi State, arrested another member of the ISWA, Umar Dogo.

“The suspects were discovered to have concluded plans to not only perpetuate the ideals of the movement in the area, but to, in collaboration with Boko Haram, carry out heinous violent attacks on innocent persons.”

He added that following intelligence reports, Adamu Hassan (aka Bale) and Abubakr Abubakar (aka Alhaji /Buba), who he described as experts in the assembling of Improvised Explosive Devices, were also arrested.

Opuiyo said two members of the dreaded Basalube kidnap group were arrested on June 17 at Karu village in Abuja.

He also said that the service on June 6, 2018, at the Boys’ hostel of Kogi State University, Anyingba, arrested 14 cult members over alleged repeated cult clashes at the institution.

He listed the items recovered from the suspects to include one locally-made pistol, one browning pistol, one shotgun, live cartridges, an axe, a machete and GSM phones.

He said that on the same day, an alleged Internet fraudster, Obinomhe Omonjele, who he said cloned the social media accounts of security personnel and used same to defraud unsuspecting members of the public, was arrested at Egbe, Uromi, Esan North Local Government Area, Edo State.

He said that while other accomplices of his, particularly, Sabi Boy, were on the run, investigations were still ongoing.

Opuiyo said, “With these arrests, it is envisaged that calmness will return to otherwise volatile areas where these criminals had held sway.

“The service is, therefore, poised to consolidate on these successes and bring about an atmosphere in which law-abiding citizens will pursue their legitimate business.”