Death toll for Sallah suicide attack in Borno rises to 43

7:59 AM CuteNaija 0 Latest News in Nigeria 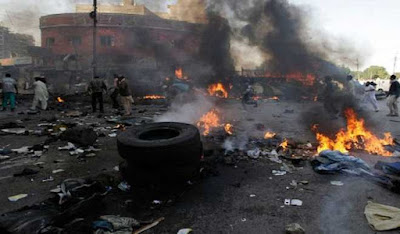 Blasts ripped through the town of Damboa in Borno state on Saturday evening targeting people returning from celebrating the Eid al-Fitr holiday, in an attack bearing all the hallmarks of Boko Haram.

“About 43 lost their lives, 12 individuals who are desperately injured” are being flown by helicopter to the Maiduguri with help from the ICRC, local official Kaumi Wakil told AFP, referring to the capital of Borno and the birthplace of Boko Haram.

Wakil said 35 others were injured and were in the “process of referral to the ICRC clinic” in Biu. Another local official confirmed the new death toll, which had initially been reported as 31.

Following the suicide bombings, the jihadists fired rocket-propelled grenades into the crowds that had gathered at the scene of the attacks, driving the number of casualties higher.

“Civilians consistently bear the brunt of the conflict and over 200 women, children and men have now been killed in indiscriminate attacks in the north-east since the beginning of the year,” the UN humanitarian coordinator in Nigeria Myrta Kaulard said.

“I urge the government of Nigeria to further step up protection of people.”

Nigerian President Muhammadu Buhari came into power in 2015 vowing to stamp out Boko Haram, but the jihadists continue to stage frequent attacks, targeting both civilians and security forces.

The deadly violence, which has claimed more than 20,000 lives in nine years, has put Buhari under pressure as elections approach in February next year.