Dambazau to Nigerians: Re-elect Buhari because you can’t get anyone better


Abdulrahman Dambazau, minister of interior, says President Muhammadu Buhari should be re-elected because Nigeria cannot get anybody better than him. 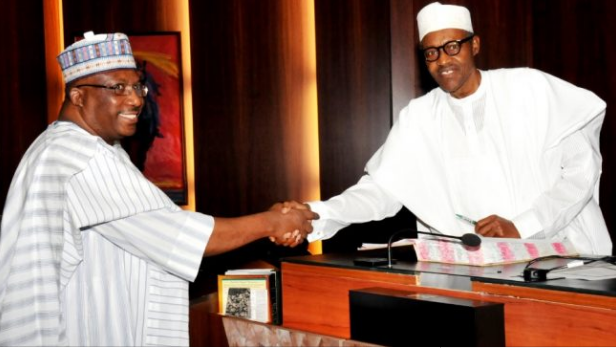 He said this on Thursday at the opening ceremony of the International Press Institute (IPI) world congress with theme: “Why good journalism matters: Quality media for strong society”.

Dambazzu, in company of Kemi Adeosun, minister of finance; Lai Mohammed, minister of information and Okey Enelamah, minister of trade and investment, were asked by John Momoh, the moderator, to tell the audience in one sentence why the president should be re-elected.

“Continuity, Nigeria cannot get anybody better than Buhari,” the minister of interior quipped.

When asked to rate the performance of the federal government in checking Nigeria’s porous borders on a scale of one to 10, the minister rated the government 10.

“This is a difficult thing you are giving me because when you are talking about border security and management it involves so many things. That is one,” he said.

“Secondly, from what I have said, it isn’t something that is left to Nigeria alone. It is a regional problem that we are working very closely with our neighbouring countries on. In our own efforts, I will tell you 10/10.”

Mohammed said the ruling All Progressives Congress (APC) has delivered its campaign promises.

Enelamah said the president deserves to be elected again because government had changed the narrative.

“We have focused on insecurity, corruption among others, rather than saying that corruption is not a problem,” he said.

Adeosun, who mentioned the economic diversification of the present administration, said Buhari should be re-elected “because the economy is well-positioned. Nigeria is on the path for sustainable growth recovery.”

Adeosun had earlier said infrastructure was one of the defining features of the administration.

She added “Our commitment to strengthen the infrastructure is part of our plan. It was embedded in the budget that was signed yesterday the huge amount that was budgeted for infrastructure. In the next few months, you are going to see projected completed. Some of these are multimillion naira projects. We are committed to that.”