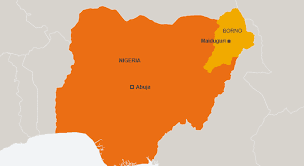 Suspected members of the dreaded Boko Haram sect disguised as farmers on bicycles invaded and opened fire on some people on their farmlands along Damboa- Bitta- Gwoza road leading to the killing of several innocent farmers, with other sustaining gunshot wounds.

Although, the incident took place some few days ago within the week in Damboa Local Government Area of Borno state, lack of telecommunication services in the area delayed access to information on the latest attacks.

Damboa is south and about 80 kilometres drive from Maiduguri, the state capital, in which, more than 30 people were killed, with other injured during the just concluded Eid- El Fitr Sallah Break, when six suicide bombers invaded its Council Headquarters. Some residents in the affected communities said, the insurgents rode on bicycles with AK47 rifles and infiltrated farmlands where farmers residing along the affected road were busy planting their crops before opening fire on them.

The development led to the farmers scamper for safety and run into the bush, unfortunately, those who ran into the bush met their Waterloo, as some stationed insurgents around the fringes of Sambisa Forests descended on them killing over 10 farmers.

A very senior Security Official in Damboa who participated in the rescue and recovery of dead victims who is not authorised to talk to the press said, four dead bodies of innocent farmers were recovered, while one person who sustained gunshot injuries had been evacuated to an undisclosed hospital for treatment last Wednesday.

The security source also said, several other farmers are still missing, as there whereabouts are ascertained. “I can confidently confirm to you that there was a deadly attack on farmers along Damboa- Bitta- Gwoza road within the week, the incident happened three days ago, when some insurgents who disguised as farmers on bicycles invaded some farmlands and opened fire on innocent civilians.

” Due to the nature of the road where massive Improvised Explosive Devices (IEDs) and Mines were planted by insurgents along the road, we were unable to reach the affected area on time, as we have to clear the area off planted mines, fortunately, when we go further to the scene, we were able to recover four dead bodies, while one person who sustained gunshot wounds was rescued and taken to hospital for treatment “. The security Source revealed.