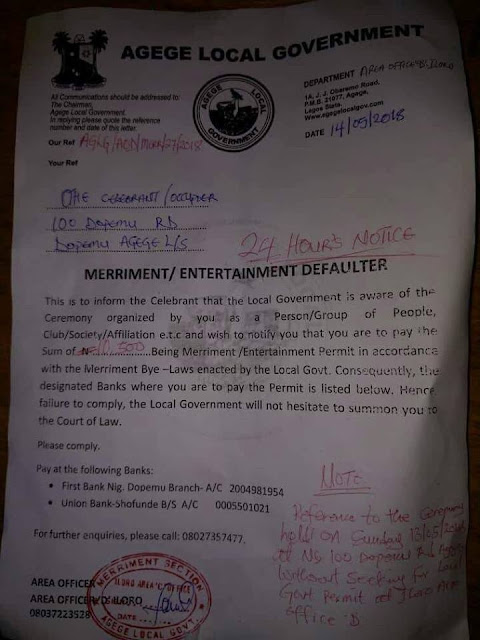 There is a Merriment and Entertainment permit in some parts of Lagos.


What this means is that, as Lagos resident, each time you want to hold a social gathering such as birthday party, burial ceremony, wedding, and such like, you need a permit — the Merriment and Entertainment Permit — being issued by Agege Local Government Area as ratified by law.

The local government authority on Thursday confirmed that residents need to obtain the permit before they could legitimately hold social gathering.

Olugbenga said that residents who want to have a party are required to pay a total of N10,500 into the coffers of the local government, while the invoice would be raised in the office.

We contacted the phone number on an Agege LG letterhead, which has been trending on the social media.

The letter stated that the recipient, whose house was on 100, Dopemu Road, Agege, had held a party on 13th May, 2018 without seeking and obtaining the permission of the local government area office in Iloro.

The letter therefore asked the recipients to pay N10,500 being “Merriment/Entertainment permit in accordance with the Merriment bye-Laws enacted by the Local government.”

Bank’s details for payment were also listed in the letter.

Mr. Olugbenga clarified that the permit was necessary for all social gatherings, whether they are held in private residences or at rented event centres.

He was, however, clear that the council would not grant a permit for a party to be held on the road.