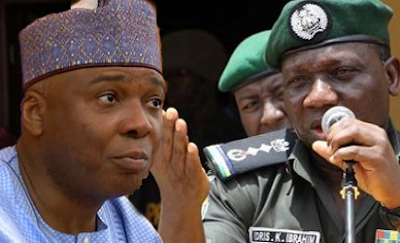 The Senate delegation will meet with President Muhammadu Buhari on Tuesday (today) over an allegation by Senator Bukola Saraki against the Inspector-General of Police, Ibrahim Idris.

The Senate President, Saraki, had on Wednesday alleged that Idris planned to implicate him in the trial of some suspected cult members arrested in Kwara State.

A reliable source in the Senate informed newsmen on Monday that the meeting will hold after Tuesday’s plenary.

“The meeting with the President will hold tomorrow afternoon,” the source said on the condition of anonymity.

The Senate had on Wednesday resolved to meet with Buhari to report the activities of the police boss to him, following Saraki’s allegation of the alleged plot by the IG to frame him in the case.

Saraki had told the lawmakers that he was informed by Governor Abdulfatah Ahmed that the suspects had been moved from Kwara State to Abuja for prosecution allegedly on the orders of the IG. He added that part of the plan was to doctor the statements made by the suspects to implicate him in the trial.

He said, “My distinguished colleagues, there is an issue which I need to bring to your attention very urgently.

“Last night, my state governor, Governor Abdulfatah Ahmed, revealed to me the information at his disposal that a group of suspects who had been arrested and were in police cells for several weeks in our state for cultism, and whose investigation had been concluded and were about to be under prosecution under the state law on the advice of the Director of Public Prosecutions and the Ministry of Justice, have, all of a sudden, been ordered to be transferred to Abuja this morning.

“The information reaching me, as he received it from the Commissioner of Police, is that they (police) have been directed by the IG to bring them (suspects) to Abuja. With the information that he (Ahmed) has, it is for them to find how to alter their (the suspects’) statement already made in Ilorin and try and implicate the state government and particularly myself.

“As we speak now, those suspects are already here in Abuja. These acts, I don’t know whether to call it desperation, blackmail or intimidation. All the action to undermine our democracy is a recipe for anarchy because we are doing our work by asking officials to obey the law, due process and subject themselves to constituted authority.”

In the written speech, a part of which he read out at the plenary, Saraki linked the alleged plot to the invitations by the Senate to the IG, which the police boss did not answer in person.

Meanwhile, the embattled lawmaker representing Kogi West Senatorial District, Senator Dino Melaye, has thanked Nigerians for standing by him during his travails in the hands of the Federal Government.

Melaye, in a lengthy message on Monday, alleged that his trials were plots by the state to silence him over his criticisms of the government.

The lawmaker, however, stated that he was more resolute on his convictions.

Melaye is being prosecuted by the Nigeria Police in two separate courts. While he is standing trial in a Lokoja, Kogi State court on charges bordering on gun-running, he is also on trial in an Abuja court for attempted suicide, among other charges.

Melaye, in his message, said, “They unleashed an endless barrage of physical, psychological, metaphysical and emotional torture and assault on me, but through the power of the Most High and you, the good people of Nigeria, we have once again seen the triumph of truth over lies and good over evil.”

He added that the state unleashed its raw power by sending 200 armed policemen against him.

He said the government wanted to break his spirit because he called for justice and accountability.