Fear grips residents in South-East over May 30 ‘Biafra Day’ 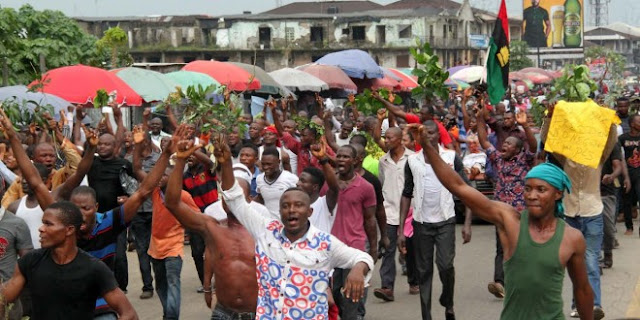 There was palatable fear in Enugu and other major cities in the South-East on Monday over the planned celebration of the Biafra Day on tomorrow.

In Enugu, it was observed that many residents are worried over the possible breakdown of law and order on the day.

There are also concerns over possible clashes between pro-Biafran activists and security agents, a situation which residents fear could lead to the loss of innocent lives and destruction of property.

Feelers from other states in the zone also indicate a similar disposition among residents.

Pro-Biafran groups, including the Indigenous People of Biafra and the Movement for the Actualisation of the Sovereign State of Biafra, called for the sit-at-home protest in order to celebrate the anniversary of the defunct Republic of Biafra on May 30, the date the breakaway state declared independence from Nigeria in 1967.

In 2017, the event was marked with a sit-at-home protest ordered by IPOB, which grounded commercial activities in major cities in the zone, as well as Port Harcourt, in Rivers State, and Asaba, in Delta State.

IPOB has again ordered a sit-at-home protest to mark this year’s ‘Biafra Day’, but the other major pro-Biafran groups have different plans.

MASSOB intends to commemorate the anniversary with lectures and a candlelight procession, while the Biafra Zionists Federation has announced plans to raise the flag of the defunct Republic of Biafra at the Enugu State Government House on that day.

In a bid to avert a possible breakdown of law and order, the troops of the 82 Division of the Nigerian Army have engaged in a ‘massive show of force’ by parading through major cities in the geopolitical zone in a long convoy of military vehicles.

Men of the 553 Base Services Group, Nigeria Airforce, Nigeria Police Force, Department of State Services and the Nigerian Security and Civil Defence Corps are participating in the show of force.

The Deputy Director, Public Relations, 82 Division, Col. Sagir Musa, explained that the parade of the heavily armed troops was “purely a show of force, aimed at sending a clear message to individuals or groups who intend to cause a breakdown of law and order.”

Musa added, “Law-abiding members of the public are enjoined not to worry about seeing a long convoy of military and paramilitary vehicles and equipment on selected locations across the South-East zone.”

The Enugu State Police Command has also declared its readiness to engage the pro-Biafran agitators.

On May 22, 32 members of the Biafra Independence Movement faction of MASSOB, who were marking their own ‘Biafra Day,’ were arrested while they were about to embark on a parade through Enugu metropolis.

The activists are currently in prison custody, having been remanded after they were arraigned before a magistrate court.

But the pro-Biafran groups have vowed to go ahead with their plans for the Biafra Day.

IPOB has vowed that the South-East and the South-South, as well as other states marked out for the exercise, would be locked down on Wednesday, May 30th.

The secessionist group said nothing would stop the sit-at-home protest.

The group has urged every family, kindred, village, clan and town in the South-East and the other designated areas to remain indoors from 6 pm on Tuesday, May 29, to 6 pm on May 30.

IPOB has warned the army and the police against interfering with the exercise.

“It will be crass insensitivity of the highest order for any police or army officer in the South-East to intrude upon our grief,” IPOB spokesman, Emma Powerful, said in a statement.

The Biafra Zionists Federation, on the other hand, has vowed that ‘not even fighter jets’ would stop the plan to raise the Biafran flag at the Enugu State Government House on May 30.

The group, led by Mr. Benjamin Onwuka, a lawyer, had attempted to declare the ‘independence’ of Biafra in the past.

Onwuka was detained, and charged with treason, after leading some members of the BZF to invade the studios of Enugu State Broadcasting Service in a failed bid to announce the secession of Biafra on June 5, 2014.

A policeman was killed during the incident.

In July 2017, having been released from detention, he named himself ‘Interim President of Biafra’, and appointed some prominent Nigerians, including an economist, Prof. Pat Utomi, a former governor of the Central Bank of Nigeria, Prof. Chukwuma Soludo, and former information ministers, Jerry Gana and Labaran Maku, as members of the Biafran cabinet.

Rather, he urged them to converge on the Enugu Government House to witness the raising of the Biafran flag.

The spokesman for the Enugu State Police Command, Mr. Ebere Amaraizu, told one of our correspondents on Monday that the police had taken note of Onwuka’s comments, as well as IPOB’s declarations.

Amaraizu said the police are ready for the secessionists.

But MASSOB and other pro-Biafran group have insisted that despite the influx of security men into the South-East, the groups will mark the 51st anniversary of the declaration of the Republic of Biafra on May 30.

The groups said that no amount of intimidation by the security agencies would deter their members from going on with the planned anniversary.

A statement on Monday signed by MASSOB leader, Madu, Felix Anochirimonye of the Eastern People’s Congress, Rita Anibuogu of the Movement of Biafrans in Nigeria and Innocent Amadi for Bile Human Rights Initiative, said that the celebration would start on May 29 with a candlelight procession.