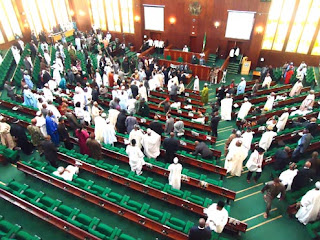 The Speaker of the House of Representatives, Mr. Yakubu Dogara, and the Chairman, House Committee on Foreign Relations, Ms. Nnenna Elendu-Ukeje, have raised the alarm over the proliferation of small arms in Nigeria.


This is contained in a bill to regulate the proliferation of small arms and light weapons, which passed second reading at the House of Representatives on Wednesday.

The bill was jointly sponsored by Dogara, and Elendu-Ukeje.

While leading the debate on the bill, Elendu-Ukeje quoted a recent United Nations Centre for Peace and Disarmament’s report, which said there were about 500 million small arms in circulation in West Africa.

She said the more frightening part was that “70 per cent of those arms reside in Nigeria.”

Elendu-Ukeje noted that by implication, about 350 million small arms and light weapons were in circulation in Nigeria alone.

The lawmaker added that with such a high number of arms in circulation, it was easy for the sponsors of armed conflicts in the country to take advantage of the situation.

The proposed law will establish a national commission to among other things, prohibit the movement of small arms, discourage Nigerians from carrying arms/light weapons as well as stockpile and destroy such arms.

Elendu-Ukeje added, “This bill intends to address not only the security issues but also human right issues.

“Some eminent personalities in this country have out of frustration in the seemingly unending state of violence advocated self-defence.

“The casualty figures are very high on the side of both state and non-state actors and this proliferation of arms, if left unabated, will ensure mutually assured destruction with women and children the most vulnerable in theatres of violence and the economy taking a large hit.”

Elendu-Ukeje urged members to pass the bill in a bid to have a commission in place, charged with the primary responsibility of regulating the proliferation of arms.

She informed the House that many hotspots of armed conflicts in Africa were the sources of the arms.

The Chairman, Committee on Human Rights, Mr. Edward Pwajok, SAN, told the session that with 350 million arms in circulation, the weapons could go round all Nigerians twice.

“Mr. Speaker, there is a serious problem here. The arms in circulation in wrong hands are already more than the country’s population of about 180 million.

“It means that nearly every Nigerian will have two weapons. That is the grave danger,” he added.

The Majority Leader of the House, Mr. Femi Gbajabiamila, lent his voice to the bill, calling for detailed penalties to be spelt out in it against offenders.

He stated that any gun regulation law ordinarily spelt out penalties for offenders. In the US and other countries around the world, that is the practice.

“There must be penalties for violation. I believe this is one aspect we can add to this otherwise very important bill at the next stage, after passing the second reading”, he stated.