Bianca Ojukwu, wife of late Biafran warlord, and former Nigerian Ambassador to Spain, has revealed how she once asked her husband why he was always characterized and referred to in the media as the most ‘misunderstood’ Nigerian. 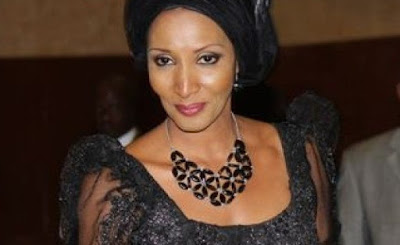 She said Ojukwu answered and said ‘Not to worry, my dear’, adding, ‘in Nigeria, you become better understood once you are dead and harmless.’

She shared this on Facebook being part of her speech at the Silver Bird ‘Man of the Year’ Award held in Lagos at the weekend.

She collected a posthumous award for the ex-Biafran warlord.

According to her, “I once asked Dim Chukwuemeka Odumegwu Ojukwu why he was always characterized and referred to in the media as the most ‘misunderstood’ Nigerian. His answer was instant and incisive…’Not to worry, my dear’, he said philosophically, ‘in Nigeria, you become better understood once you are dead and harmless’… vintage Ikemba!

“And so it was over the weekend when Dim Chukwuemeka Odumegwu Ojukwu was honoured with a Posthumous Award at the Silverbird Man of the Year Award Ceremony.

“It was a glamorous and well attended event and was a fitting occasion to celebrate and pay homage to Chukwuemeka Odumegwu Ojukwu, General of the People’s Army who was the quintessential Man in the Arena, a man who rode the thunder and quelled the storm; the man who saw tomorrow, and fought valiantly for the survival of his people, and in fierce defense of their rights in their quest to be treated as equal partners in the Nigerian project.

“And whenever called upon to receive an honour on his behalf, we, his devotees, together with millions of the people of the Land of the Rising sun, in whose cause he spent his life are once again reassured that his place in history is assured, and that place will never be with those who have never known great devotions..the triumph of high achievement or with those cold and timid souls who neither know victory nor defeat…

“My thanks go to all those who joined me at the occasion in receiving this award, most especially to His Excellency, The Governor of Anambra State and Leader of the All Progressives Grand Alliance, Chief Willie Obiano, Chief Sir Victor Umeh, OHAMADIKE, the Newest Distinguished Senator of the Federal “Republic of Nigeria( Senator 109), and also to the National Chairman of the All Progressives Grand Alliance Ozonkpu Victor Oye who sent a powerful delegation of Party Stalwarts.

“My profound appreciation goes also to His Excellency Governor Willie Obiano and Her Excellency Chief (Mrs) EbeleChukwu Obiano, who hosted a Sumptuous Celebration Dinner for us all after the event, at their beautiful home. Ikemba lives….because our hopes live on and our dream shall never die.”