Dapchi parents send delegation to Abuja to press for action 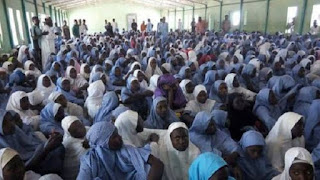 Parents of the 110 abducted Dapchi schoolgirls on Thursday sent a delegation to Abuja in continuation of their clamour for the release of the pupils abducted by Boko Haram over two weeks ago.


Secretary of the parents’ association, Bukar Kachalla, told our correspondent in a telephone interview that the Dapchi delegation was expected to meet with the Bring Back Our Girls campaigners and other women’s groups in Abuja at the World Women’s Day celebration to help expand the clamour for the release of the girls.

Kachalla said the girls, who have been in captivity for the past 18 days, express belief that the victims have been passing through horrifying experience, hence the need to increase efforts to press for their release.

“Most of these girls are between the ages of 11 and 15 years and they don’t know anything. Allowing them to pass through this kind of experience at this age for long will affect them greatly.

“Aisha Wakil, who participated in the negotiation between Boko Haram and the Federal Government in the past, has come out to say she has been in touch with the abductors of our girls.

“So, the the Federal Government should contact her to help bring back our girls,” he said.

Kachalla also told our correspondent that the Federal Government committee on the rescue of the girls had, on Tuesday, visited the parents in Dapchi with assurance that the girls would be rescued by all means.

According to him, the visit was the first of its kind since the girls were abducted on February 19.

“We appreciate the visit because it availed us the opportunity to speak out our minds.

“They interacted with us and from the discussion, we tend to believe them that government is doing its best to rescue the girls.

“It’s a security issue and they didn’t tell us when the girls will return. Even though we believe them, we will only be satisfied when our daughters are brought back,” he said.