Whether you like my face or not, for now I am the governor of Rivers State – Wike 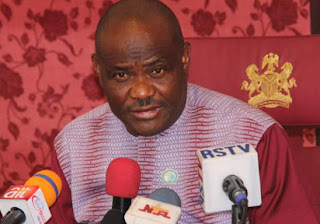 Rivers State Governor, Nyesom Ezenwo Wike has reiterated his call on Rivers politicians to promote the interest of the state ahead of all political considerations saying ‘Whether or not you like my face, for now, I am the governor of Rivers State. It is by the Grace of God that I occupy the office’

Speaking during a reception after the Child Dedication of Sir and Lady Marcus Nle-Ejji at the St Jude’s Military Church in Port Harcourt on Sunday, Governor Wike advised politicians not to allow their political affiliation compel them to take actions that will negate the development of the state. He said despite being a prominent member of the PDP, he has continued to relate with friends in all other parties because of the need to build a framework of peace across the state.

The governor noted that sustaining relationships across party lines cannot stop political pursuit. He said: “Whether or not you like my face, for now, I am the governor of Rivers State. It is by the Grace of God that I occupy the office “I will not be the last governor of Rivers State. After me, God will also place another person in the same office. Therefore, we have no reason to disrupt the development process of the state. All of us must work on unity, as Rivers people to develop the state “.

He stressed that he will never plot bad against other politicians, but stressed that he will complete his constitutionally defined terms as nobody can force him out of leadership. He urged Rivers politicians to use the Child Dedication of Hon. Sir and Lady Marcus Nle-Ejji as a platform to promote friendship. He thanked God for blessing the family after several years of waiting for a child, pointing out that they have proved to believers in God.