A+ A-
Print Email
Boko Haram leader, Shekau has appeared in a new video, days after the military said the sect has been completely defeated. 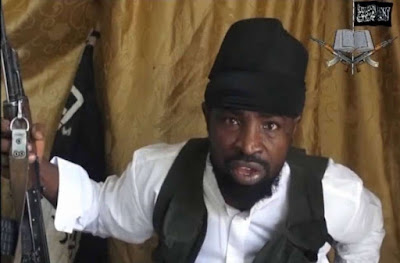 He disclosed that hundreds of insurgents surrendered, several others fled their enclave, while over 100 civilians were rescued.

“My soldiers are in the heart of Boko Haram enclave that is Camp Zairo, the gallant troops have taken total control of Sambisa Forest.

“We have broken the heart and soul of Shekau’s group, taking over the camp and its environs.

“They are on the run and we are pursuing them to wherever they go. This time around there is no place for escape anywhere.

“We had earlier asked those of them that want to surrender to do so and we are still asking them to come out and surrender otherwise they are going to meet it the hard way”, he said.

But in a new footage, Shekau threatened more violence in the region, insisting that his men were still in Sambisa, if not, “where are the police wives that ‘are being arrested by us'”.

Ahmad Sakilda, a journalist known for his coverage of the sect, also confirmed the new video on Twitter.

“Abubakar Shekau looks and sounded weary in his latest video, but is he really the trouble now? The insurgency has developed beyond his reach. No doubt, #ISWAP is the future of the insurgency that we all have to contend with in the upcoming years”, he tweeted.