My letter to Buhari not out of ‘bad belle’ - Obasanjo 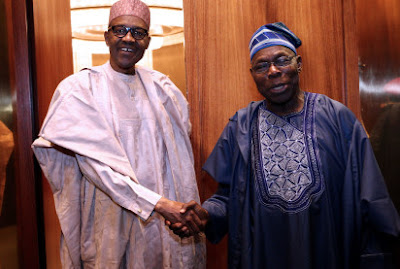 A former President, Chief Olusegun Obasanjo, says his recent open letter to President Muhammadu Buhari was not borne out malice or ‘bad belle’ but out of his deep concern for the situation in the country.

He said this on Thursday at the secretariat of the Nigeria Union of Journalists, Oke Ilewo area of Abeokuta, shortly after the Coalition for Nigeria Movement was inaugurated in Ogun State, and he was registered as a member of the movement, after formally filling the registration form.

Obasanjo arrived the venue at exactly 12.44pm in company with former governors of Cross River and Osun States, Donald Duke and Prince Olagunsoye Oyinlola respectively, among others.

The former president while addressing scores of potential members who had gathered at the venue, said he was surprised that many Nigerians were worried that he had exchange pleasantries with President Buhari at the African Unity summit at Addis Ababa, capital of Ethiopia, few days after he wrote the open letter to him(Buhari).

He noted that he never condemned the Buhari-led administration in totality, as he explained he gave him commendation in areas where it had performed well.

Obasanjo, however, spoke in parable, hinting that big masquerades have taking the centre stage, and the small masquerades must quit the stage.

He said, “Last week, I issued a statement which I did not do lightly or frivolously but out of deep concern for the situation of our country.

“I wonder why some Nigerians were worried why I had to pay respect to the Nigerian President at Addis Ababa. That’s my own upbringing as a well-born and bred Yoruba boy.

“That doesn’t mean that what I have said about the President, which I did not say out of bitterness and hatred. It is evidence that the President has performed, in some areas, good enough.

” In other areas not good and a proper advice which he may take and he may not take.

“I didn’t do that out of malice or out of ‘bad belle’; I did it out of my respect for that office and my interest and I hope in your interest and the interest of Buhari in Nigeria.”