The Indigenous People of Biafra, IPOB, has raised the alarm over the purported disappearance of the case file of its leader, Mr Nnamdi Kanu at the Appeal Court. 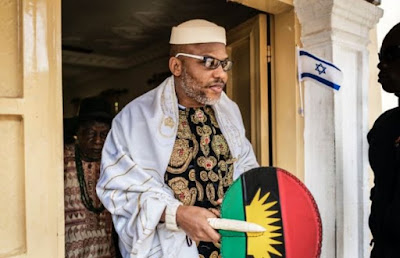 The group said the announcement of the disappearance of the file was a huge joke that further portrayed the rot in the Nigerian Justice sector, while calling on the chief Judge of the federation to step in and salvage what was left of its integrity.

A press release signed by its spokesman, Mr Emma Powerful stated that, “Court of Appeal judges today sitting in Abuja has declared the file of the leader of IPOB missing/misplaced. It is unheard of in the history of Nigerian judiciary that a matter coming up for final judgement almost a year after the appellate court jury adjourned it having heard all the arguments would go missing.

“Not only is the delay by the Appeal Court illegal and unconstitutional, the conduct of those that heard and handled this very case is troubling. We no longer know what to make of the Nigerian Judicial system. This is beyond a joke.”

IPOB mocked the court, saying that the only thing left was for the court to declare that the case file had been swallowed by a mysterious snake as a staff of JAMB had recently declared, over a missing N36million.

“The only thing missing from today’s court hearing is the proverbial snake because it wasn’t confirmed if the case file had been swallowed by yet another snake at the Appeal Court.

“We are drawing the attention of the civilised world to the mess the Nigerian judiciary, terrorised by a brutal dictatorial regime has turned into.

“Instead of delivering judgement for Mazi Nnamdi Kanu, the judiciary would rather break every constitutional provision guiding the time line in cases at the Appeal Court,”‎ it said.

Kanu had gone to court to challenge the ruling of Justice John Tsoho when he reversed a ruling he gave on the masking of witnesses in the treasonable felony trial of the IPOB leader and 3 others.

The group lamented that the matter was already one year overdue because the Nigerian constitution, which judges are meant to interprete and uphold, clearly stipulates that all Appeal Court judgements must be delivered within three months.

“It is up to a year without any judgement on this matter contrary to constitutional provision.

“We call on the Chief Justice of the Federation to step into this matter before the already tarnished image of the judiciary suffers even more before the eyes of the world,” he said.