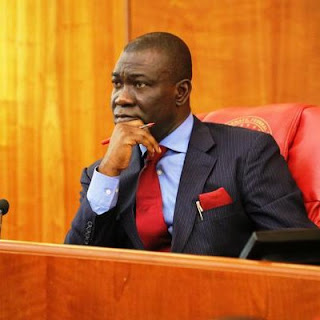 The Deputy Senate president, Sen Ike Ekweremadu has on Tuesday condemned the recent attacks and killings of innocent people by alleged Fulani herdsmen, noting that the ‘Nigerian Senate’ is tired of observing a minute silence for the dead.


Ekweremadu spewed his anger on the recent Benue and Taraba killings on today’s senate plenary, saying that Nigerians must have peace and security before thinking of infrastructure and development.

According to him, “The senate is not the only group or body concerned, Nigerians are also worried. We are tired of always observing a minute silence, we must have peace and security before even thinking of infrastructure and development in the Country”, he said.

On the same vein, the senator representing Kogi west constituency, Sen Dino Melaye opined that “Justice is a scarce commodity, the president and Vice President should take a bold step and ring the bell of justice.”

Speaking on state policing, an issue debated over the years, Senator Godswill Akpabio said, “We should revisit the constitutional review where we can start State policing and community policing so as to curb these kind of internal mayhem.”

On his own part, Sen Gemade said “Police commissioner, Director DSS and Army commander of Benue State reported that those harboring these foreign armed bandits are known and reports have been sent to FCT.”

Supporting postulations of fellow distinguished senators, Sen. Sam Anyanwu said, “ They must be tagged as terrorist since they are foreign armed bandits and not play politics by tagging them as Fulani herdsmen.”

In response to the above positions of these senators, the senate president Dr. Bukola Ssaraki said, “I am not unmindful of the sobering fact that the new year has met many citizens in a reflective mood. Many were on the queue for petrol.

“Many households are grief-stricken. This mood of reflection is also one from which no lawmaker is immune; what affects one, affects all. When one part of the body is hurting, the whole body hurts, and this holds true for the entire nation.

“Distinguished colleagues, you will agree with me that even more sober reflection attends the killings in some parts of the country, particularly recent tragic events in Benue State.

“We condemn these killings in the strongest terms & we declare that mindless bloodletting has no place in our society. I offer our sincerest condolences to the people of Benue & indeed to all who have suffered the loss of their loved ones as a result of these wanton acts.

“The 8th Senate has continued its historic run, because by the end of 2017, we had passed 140 Bills over a period of 30 months. The landmark Economic Bills we passed helped to propel the country’s emergence from recession, powering us upwards in the Ease of Doing Business Report. While the legislative feats of the year gone by shall go down in the annals of lawmaking in this country, what is also true is that we cannot lose momentum, nor can we afford to rest on our oars”, he finally said.