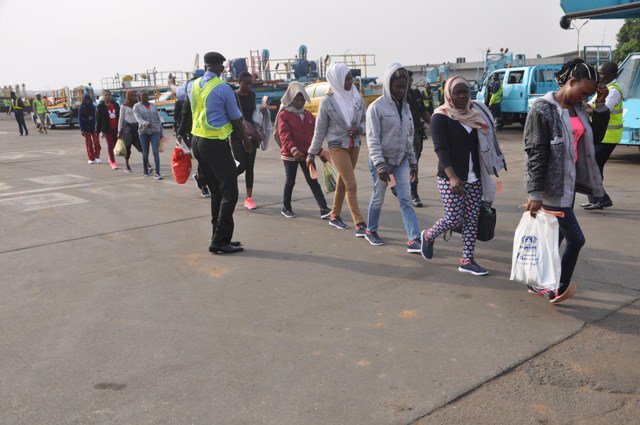 The third batch of 560 Nigerian returnees from Libya have arrived Port Harcourt.

Mr Martins Ejike, the South-South Zonal Coordinator, National Emergency Management Agency (NEMA), made this known to newsmen on Sunday in Port Harcourt. Ejike said that the returnees, comprising 540 adult and 20 infants, arrived the airport on board Max Air, with registration No: 5N-HMM at about 11:52 p.m.

However, he expressed dissatisfaction over poor response of some state governments in evacuating the Libyan returnees from the reception centre in the state.

The zonal coordinator said that the Federal Government gave the states 48 hours to enable them evacuate their returnees from the centre, He expressed dismay that some states failed to abide by the directives, noting that South-West states are not responding to the evacuation process. Ejike said that the choice of Port Harcourt airport as evacuation route was based on proximity to the most affected states.

“A graphic showed that Edo state along recorded 309 out of 484 migrants, the record also showed that over 80 per cent of the returnees were indigenes of Edo and Delta states. “It is more convenient for the largely affected states to evacuate their returnees from Port Harcourt,” he said. Mr Muhammad Dahiru, the Public Relations Officer of Max Air, also said that the airline was competent to convey 1,680 returnees if passengers were cleared without delays.

Dahiru said that the airline deployed three air crafts with 560 capacity each for the operation, adding that speedy operation can be actualised if passengers documentation and clearance are not delayed. One of the returnees, Mr Paul Eke, who thanked the federal government on ensuring smooth return of migrants, said that the measure showed government’s commitment to its citizens.

Eke also urged the government to continue its rescue process to the hinterland in the Libyan states where some Nigerians were being imprisoned and unjustly tortured. “I urge our federal government to do more by rescuing some Nigerians who are still trapped in some interior parts of Libya.

“I stayed in Zawe Superata, this place is like an exit point to Italy and so many Nigerians are still being imprisoned there,” Eke alleged.