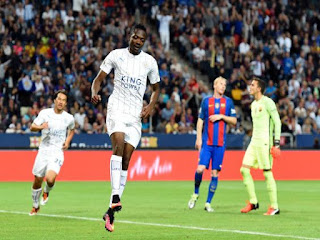 Super Eagles Coach Gernot Rohr on Tuesday said that the team’s pacy forward, Ahmed Musa, could be used as a bait to get home support for his team at the World Cup.


The Franco-German coach, who just signed a new two-year improved contract, said that Musa would remain an integral part of his plans for the World Cup if his transfer back to Russia materialises.

He said that Musa was loved in Russia, adding that the same experience goes for Brian Idowu who is based in Russia but got a standing ovation when he was introduced in the match against Argentina.

“We are in the transfer window now and I believe he will change team; Musa is going back to Russia and it is very good news that he will be playing there.

“Musa playing in Russia is a positive development so that we will have the sympathy of Russian fans. We have seen that when Brian Idowu was introduced in the game against Argentina.

“The fans encouraged us and he scored, this can be a good reason to get supports from Russian fans because the people there like Musa.

“Also, Musa knows the people there because he is familiar with them, he knows the weather condition too,’’ he said.

On Vincent Enyeama, Rohr was reserved on his recall but said that the veteran goalkeeper stood a chance of breaking into the team provided he had playing time or move to another club.

“We are waiting for what will happen to Enyeama if he plays for his club and get more playing time he can make it.

“He’s been delayed now because of his injury and now, he has about two goalkeepers ahead of him, so he has to change club during this FIFA transfer window.

“We also have other good goalkeepers, when I arrived, Carl Ikeme did well but now out because of illness; we are praying for him, then, Akpeyi who played against Algeria but unlucky against South Africa.

“We also have Ezenwa, Alampasu who is not playing regularly in Portugal and the new entrant Uzoho, who is doing well with the U-23 team of Deportivo La Coruna in Spain,’’ he said.

Rohr said that in considering who gets the shirt in Russia, the fitness of each playing would be the first consideration and also the competition among options in the same position.

“The first consideration is the fitness of the player if the player gets a regular playing time in his club.

“Then, I also consider the options we have on various positions we have in the team, the players will be given equal chance to prove themselves, then the technical bench will decide.

“We also have good defenders too, Ebuechi is on his way to Benfica; I told him he is good but he must be playing, so if he does not play, no chance for him.

“For Alex Iwobi, he had a little issue, but I am happy the fatherly role Wenger played by giving him a second chance. I have been in constant touch with coaches of Nigerian players,’’ he said.